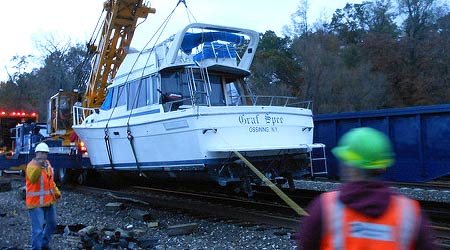 Hurricane Sandy recovery and resiliency projects are continuing at MTA Long Island Rail Road (LIRR) and MTA Metro-North Railroad four years after the storm ravaged the Metropolitan Transportation Authority's rail services. The Oct. 29, 2012, storm damage resulted in an estimated $193.9 million in capital rebuilding costs for LIRR and $440 million for Metro-North. The federal government is paying for those projects at both railroads.

Likewise, since Sandy occurred LIRR has revised its hurricane operations plan to reflect the lessons learned. Also, the railroad has revised its design criteria to incorporate new standards for construction within flood zones. The new approach is being applied to all relevant designs,
including signal and other projects that are not Sandy related, Donovan said.

At LIRR, one Sandy-related project has wrapped up over the past year: The Long Island City Yard Substation restoration — a $1.1 million project — was finished in first-quarter 2015.

At Metro-North, projects completed over the past year include the replacement of the Harlem River lift bridge (HRLB) alternating-current facility house at a $7 million cost; and the replacement of damaged communication and signal equipment in various locations, which cost $5 million. Tutor Perini was the contractor on the completed HRLB effort, which was a design-bid-build project.

Restoration and recovery projects ongoing at LIRR include:
• Wreck Lead Bridge system restoration, a design-build project that involves replacing underwater cable, the bridge electrical system and emergency generator for the bridge, which crosses the Reynolds Channel. Contracts have been awarded to HDR Inc. for preliminary design and Hinck-Posillico JV LLC for submarine cable replacement. Expected completion: April 2017.
• Long Beach Branch systems restoration. This design-build project will replace the Oceanside, Oil City and Long Beach substations. Because this branch is flood prone, the railroad is rebuilding them with resiliency in mind: The substations are being built at a higher elevation to better protect equipment against future extreme weather. Contracts have been awarded to AECOM for design and CPS; Litehouse Builders for equipment foundations and platform; and Ansaldo STS USA for the signal system. Expected completion: September 2019.
• West Side Yard restoration, a project to replace signals, power and other assets. This work is being coordinated with the West Side Yard Overbuild and Amtrak Gateway projects. LIRR forces will perform the construction work. Contracts issued include SafeTech USA for a fire detection system. LIRR will use a third-party firm to design, furnish and deliver track and switches. Expected completion: April 2019.
• Long Beach Branch Substation replacement of switches, signals, communications and third-rail equipment. It’s a design-build project. Contracts have gone to Powell Electrical Systems for substation replacement, and Myers Controlled Power LLC for D-B Long Beach substation replacement. There are smaller-value contracts for design, construction phase services, surveys and abatement. Anticipated completion: January 2018.
• Infrastructure and system upgrades of station, signal and power component repair and restoration has been underway at locations throughout the LIRR network. The work is being performed by third-party and LIRR construction forces. Contracts include Litehouse Builders for the replacement and upgrades at Hillside, Penn Station 34th Street Gate, and Westbury Shelter Shed. Anticipated completion: January 2017.
• 1st Avenue Substation restoration, which will replace Substation AC switchgear and associated equipment with saltwater damage. Contracts have been issued to Jacobs for preliminary design and Mass. Electric Construction for design-build services.

LIRR resiliency projects underway include:
• Atlantic Avenue Tunnel mitigation, which is being pursued to better protect the LIRR tunnels that run under Atlantic Avenue in Brooklyn and Queens. This project will replace and raise street-level air grates to prevent water from entering the tunnel from the road. Existing pumps will be upgraded to current standards and existing sump pumps will be replaced with improved capacity pumps. Downspouts and vault drains will be replaced. LIRR forces are doing the construction, which began in 2015.
• Long Island City Yard, which will install perimeter protection and make drainage improvements to protect the yard from flooding or storm surges from the East River and Newtown Creek. Gannett Fleming has the design contract; construction procurement has not yet begun.
• River-to-river rail resiliency, which will be a design-build project. A design firm contract has not yet been awarded.
• Emergency management equipment, a project that entails the purchase of equipment to be used throughout the LIRR system, particularly in areas prone to flooding and storm surges, as well as in major yards and towers. Equipment will include generators, vehicle fueling stations, communication upgrades and weather-fighting equipment. The project involves mostly procurement, but also limited design work with specifications by the LIRR engineering department.

Major restoration projects underway at Metro-North include:
• Hudson Line substation replacements — Riverdale, Tarrytown and Croton-Harmon. Estimated cost is $44 million; projected completion date is April 2017. Ecco/Verde is the contractor for this design-bid-build project.
• Hudson Line power, signals and communication infrastructure replacement. Judlau/TC Electric is the contractor. The estimated cost for the project's first phase is $161 million; the projected completion date is December 2017. The second-phase option is expected to be exercised in November, with an expected cost of $137 million.