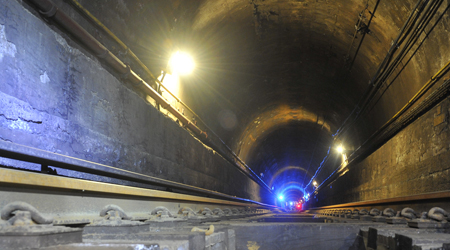 It's been four years since Hurricane Sandy slammed into the U.S. Northeast coast — and the Metropolitan Transportation Authority (MTA) is still recovering.

The Category 1 hurricane, which hit on the night of Oct. 29, 2012, left in its wake an unprecedented level of destruction to the MTA’s rail systems, with New York City Transit (NYCT) taking the biggest blow. The city’s subway infrastructure sustained more than $4.5 billion in damage from a storm surge that battered some parts of the system more than others. The worst of Sandy’s wrath was felt in lower Manhattan, Staten Island, the Rockaways, and in Brooklyn at the Coney Island rail yards and maintenance facilities.

Millions of gallons of saltwater poured into the subway system, flooding nine of NYCT's 14 tunnels. The saltwater’s corrosive effects damaged or ruined walls, tracks, switches, signals, controls, power and communication cables. In the storm's immediate aftermath, NYCT crews scrambled to restore service. Remarkably, they got the system back up and running in three days. But they completed those tasks knowing full well that it would be several years before all reconstruction would restore the subway to pre-Sandy condition, says NYCT spokesman Kevin Ortiz.

At the same time, MTA officials determined that their recovery efforts should involve more than fixing the system to its pre-Sandy status. Rather, the subways and commuter railroads should be strengthened to protect critical infrastructure from another Sandy — or worse.

"From the very beginning, we said this was going to be a process that would be years in the making," says Ortiz of the Sandy recovery. "As we've moved forward, we've followed a parallel track of making repairs and, at the same time, hardening the system against future storms."

The recovery effort took on such a key status within the organization that NYCT set up a new Sandy Recovery and Resiliency Division to coordinate the projects.

A major part of the division's work is overseeing the restoration and resilience efforts of the nine tunnels. So far, the following have been completed:
• the Montague Tunnel on the R Line, a $259 million project that wrapped up in 2015. Sandy damage to the Montague was extensive, requiring a 13-month shutdown to complete the repairs. The project was done under two contracts: one to repair all right-of-way components except for signals, the other to repair signals.
• the Greenpoint Tunnel, a $93 million project that started in July 2013 and was completed in December 2014. The tube connects Long Island City with the Greenpoint section in Brooklyn.
• the Steinway Tunnel, a $29 million project that started in spring 2013 and ended this year. Work included rebuilding the tunnel's deteriorated duct bank and bench walls, waterproofing against future storms, replacing discharge lines with higher capacity pipes, raising drains, elevating pump rooms, and replacing track. The 121-year-old tunnel is one of the subway’s oldest segments.

Moreover, repair and resiliency work is advancing at the 53rd Street Tunnel, a $92.6 million project that NYCT officials expect to finish in winter 2017. NYCT will soon award contracts for the Clark Street Tunnel project, says Ortiz. Also yet-to-be repaired is the Rutgers Tunnel, which will be addressed after the Canarsie Tunnel project is completed.

At what's estimated to be a $1 billion cost, the massive reconstruction of the 92-year-old Canarsie Tunnel will be the biggest project yet. The Canarsie is a vital link that carries the NYCT’s L train under the East River between Brooklyn and Manhattan.

In July, MTA announced that the tunnel would close for 18 months starting in 2019 in order to do the work. The full closure option was the most efficient one for NYCT and the “least painful” for subway riders, MTA officials believe. About 225,000 riders travel through the Canarsie tubes on an average weekday.

The worst destruction occurred along the duct bank that protects the tunnel’s cables. The bank has continued to deteriorate, with pieces falling onto the tracks. All 37,000 feet of duct bank will be removed and rebuilt.

The Canarsie undertaking is a big deal not only for its pricetag and the work involved, but also because of the project’s expected impact on the lives of so many NYCT riders. Before choosing the full tunnel closure option, the agency hosted held several community meetings to obtain public feedback on whether it should do the work in pieces — or one tube at a time — over the course of three years, or close the entire structure to complete the work in less time.

The procurement process for the Canarsie design and construction services has begun, and the MTA is developing alternative transportation strategies for riders during the 18-month closure. A video explaining the Canarsie project's significance is available on the MTA website.

The Canarsie and other tunnel projects are representative of the NYCT's objective to "fix and fortify," says Ortiz.

"We're reconstructing Canarsie's duct banks and making repairs to the tunnel structure. We're hardening the pumping stations and making equipment boxes water-tight," he says. "On the Montague Tunnel, for example, we reconstructed the duct banks, repaired the tunnel structure, added waterproof doors, and relocated a signal relay room to a higher location. That’s all part of repair and resiliency."

A flood wall for the Rockaways

Elsewhere in the system, long-term fixes have included a seventh-month project to construct a flood wall at the Rockaways. Service after Sandy wasn't restored to that area until May 30, 2013. In that case, Sandy’s storm surge dumped debris over the tracks, washed out the right of way, weakened the embankment and destroyed hundreds of feet of the A Line mainline connection between Howard Beach and the Rockaway Peninsula.

The hit left 35,000 daily riders without a direct train link to Manhattan, according to MTA officials.

NYCT constructed a 3-mile sheet-pile wall along the right of way after making necessary track repairs; replacing miles of signal, power and communications wires; and rehabilitating two stations. The 40-foot-high panels of sheet metal were buried 30 feet into the soil, with the remaining 10 feet of metal remaining above ground.

"Placing the sheets 30 feet below ground will prevent a washout of the right of way if a strong storm surge is coming in," says Ortiz.

"The remaining feet [of the panels] was left above ground to keep debris and water off the tracks."

Another long-term post-Sandy repair is on the drawing board for the Coney Island Rail Yard, described by MTA as "the most important yard" in the NYCT system. The 75-acre complex resembled a lake after Sandy blew in, with water covering tracks, switches, motors and signal equipment.

At a minimum, the yard — which is situated in a flood zone — needed a quick short-term solution to protect it from future flooding. The answer? Giant "trap bags" were designed to be deployed around the perimeter of the yard prior to any storm that could flood it.

"Since Sandy, we've seen a couple of storms that had the potential to flood the yard and these trap bags served their purpose to keep water out," Ortiz says.

NYCT is pursuing a design-build project to install flood-proof walls, gates and other protective measures at the yard. Work on that project, now in design, will start in the near future, he says.

Besides repairing and shoring up existing infrastructure, MTA and NYCT officials have taken a system-wide approach to flood prevention.

"Downtown Manhattan saw a significant amount of Sandy-related damage as a result of all the openings that are essentially at or below sea level — that’s everything from vents, to manholes, to escape hatches and emergency exits," Ortiz says.

The challenge? Finding something that’s quick to deploy and can accommodate the various sizes of hatches and manholes. To seal off staircases, MTA contracted with ILC Dover to install its Flex-Gate™ flood-barrier technology.

"We also are in the process of installing thousands of quickly-deployed vent closure devices that personnel can [launch] to prevent water from entering our system. And, we’re looking at engineered fiberglass covers as well, at other locations," Ortiz adds.

The project to rebuild South Ferry Terminal in Lower Manhattan also will integrate flood protection measures, such as staircase covers. Sandy dumped 15 million gallons of saltwater into the then 3-year-old station, submerging the platform and lower and upper mezzanine areas, and ruining the electrical and mechanical systems.

In 2014, MTA awarded a $194 million contract to Judlau Contracting Inc. for the South Ferry reconstruction, which is expected to be completed in summer 2017. In the meantime, the agency recommissioned the old South Ferry loop station to serve Line 1 riders until the rebuilt terminal reopens.

"We're repairing and hardening the station," says Ortiz. "Deployable fiberglass covers that slide into a structure built into the staircases will prevent water from coming in."

Some electrical components and other vital equipment are being moved to a higher location.

In September 2014, MTA awarded a contract to LK Comstock for the $105 million project, which calls for replacing interlocking track and signal systems, replacing 13 turnouts, and installing a new third rail system. A tower that houses electrical equipment destroyed in the storm will be rehabilitated.

Resiliency work will include raising all signals from 24 to 72 inches above the road bed, and using a raised platform for battery and generator enclosures, according to an MTA press release.

In total, NYCT is estimating $2.5 billion will be spent on resiliency efforts, both short- and long-term projects. The projects are designed to protect the subway system from a Category 2 hurricane, says Ortiz.

All NYCT Sandy-related repairs and reinforcement of critical infrastructure are being federally funded through grants administered by the Federal Transit Administration and the Federal Emergency Management Agency. In-house crews, contractors and subcontractors are performing the work. Ortiz couldn’t provide a targeted completion date for all Sandy-related initiatives.

"As we've said from the beginning, this will take years," he says. "I can say definitely that we are much better prepared today if we’re faced with a storm the likes of Sandy. We would not see the type of damage we saw when Sandy hit."

While NYCT sustained the greatest damage among the MTA rail systems, MTA Metro-North Railroad and MTA Long Island Rail Road (LIRR) are continuing with their Sandy repair and resiliency projects, as well. Metro-North's Sandy damage recovery costs added up to $440 million. LIRR’s capital rebuilding costs came in at $193.9 million. The federal government is funding 100 percent of the railroads' rebuilding costs, according to MTA spokesman Aaron Donovan.