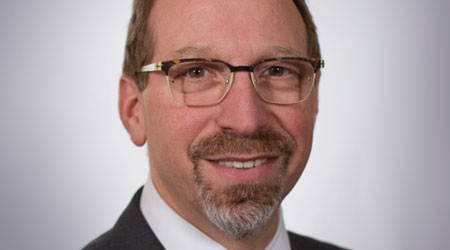 Peter Rogoff wasted no time when his flight from Washington, D.C., landed Jan. 3 at Seattle-Tacoma International Airport. He grabbed his luggage, hopped on a light-rail train operated by the transit system he now oversees and headed straight to his new office.

His first major task as Sound Transit's new chief executive officer? Convince Seattle-area voters — frustrated by a decade of suffocating traffic congestion — that a sweeping $54 billion regional transit plan on the November 2016 ballot will be the answer to their travel-related prayers. Supporters and opponents of the project have been out in force for months.

"It did feel a bit like being air-dropped into an active battlefield, but it's all been very positive," Rogoff, 56, told Progressive Railroading six months into his tenure. "This community has been receptive and is quite hungry for transit solutions in areas of the city that are punishingly congested at almost all hours of the day.”

Rogoff, who holds a Master of Business Administration degree from Georgetown University's McDonough School of Business, spent nearly 30 years in Washington, D.C., finding solutions for, among other entities, the Federal Transit Administration (FTA) and the U.S. Department of Transportation (USDOT) in the form of policy development, proposal generation, and legislative, regulatory and safety guidance.

He joined Sound Transit after serving as undersecretary of transportation for policy in the USDOT, where his work spanned all transportation modes. From 2009 to 2014, he was administrator of the FTA during a time of change, which included a new safety oversight authority granted under the federal MAP-21 law passed in 2013. Rogoff also signed a record number of fully funded grant agreements with transit agencies across the country to expand rail and rapid bus transit infrastructure.

"Peter worked tirelessly to ensure we had as many resources as we could muster to do our job," says Therese McMillan, who worked with Rogoff at the FTA and followed him as acting administrator when he left the agency. She recently was hired as chief planning officer for the Los Angeles County Metropolitan Transportation Authority (Metro). "He was demanding of top-notch quality in everything we produced at FTA, while also having an appreciation of the hard work we had in our portfolio."

Prior to the FTA, Rogoff was on the Senate Appropriations Committee's staff for 22 years, spending 14 years as the Democratic staff director of the Transportation, Housing and Urban Development Appropriations Subcommittee, where he was involved in the successful initiative to make a .08 blood alcohol concentration the national legal limit for driving a vehicle while intoxicated.

"I like the fact that the transportation realm has so many diverse aspects to it," Rogoff says. "I was able to deal with Highway Trust Fund issues, maritime safety, intercity passenger rail and air traffic control."

Now, Rogoff faces another set of challenges, and he won’t need to worry about ships or planes. But the work that pays him $298,000 per year isn’t expected to slow down any time soon.

Ramping up for a big expansion

The $53.8 billion Sound Transit 3 Plan (ST3) proposes to replace some bus routes with rail and speed up other existing bus routes by allowing them to run on freeway shoulders where possible; and to improve travel for riders, particularly during peak-hour commutes.

The plan also includes completion of a regional light-rail network as far south as the cities of Federal Way and Tacoma, and as far north as Everett, plus the construction of light-rail lines with stations serving 37 additional areas. Improvements recently introduced would speed up most of the extensions by two to five years, agency officials say. The plan would be funded through new voter-approved sales, property and motor vehicle excise taxes at an estimated annual cost of $169 for a typical taxpayer in the Sound Transit District.

In spring 2016, almost 35,000 people responded to Sound Transit’s request for public input on the proposed plan. That feedback helped Rogoff and the board’s 18 members shape the final ballot measure approved in late June for the November election.

"Right now, we are a commuter bus operator with a single light-rail line," he says. "That's an important line that makes major connections. But the big transformation will be moving this from a light-rail line to a true regional network. I hope to really help accelerate that on my watch."

In the meantime, business at Sound Transit is far from idle. Rogoff is overseeing a series of already funded projects that will open a small Link light-rail extension south of Sea-Tac Airport this fall, as well as two other Link extensions near Lake Washington and the University of Washington.

"In Washington, D.C., people spend a lot of time talking about change and expansion, but it’s a lot harder to actually do," Rogoff says. "So I very much felt, to really be a professional in this field, it's not enough to talk about it. I need to get out and do it and effect change.”

How much of a difference Rogoff will make at Sound Transit remains to be seen. But he demonstrates his own level of confidence in the ST3 plan, as well as in the voters who will decide its fate and his own role in the process.

There wasn’t really a Plan B for Rogoff’s career post-D.C.; he wanted the Sound Transit gig. Under the guidance of former CEO Joni Earl — who retired earlier this year after being on medical leave since April 2014 — this particular agency appealed to Rogoff.

"Seattle is one of a limited number of regions in the country where you have the right alignment between the political winds, the population growth and the economic growth to really facilitate continued expansion in transit," says Rogoff, whose wife is head of the Washington, D.C., operations for the Centers for Disease Control and Prevention. The couple are the parents of two teenagers.

During his time in D.C., Rogoff got to know U.S. Sen. Patty Murray (D-Wash.), chair of the Senate Transportation, Housing and Urban Development Appropriations Subcommittee. Through Murray, he became familiar with Sound Transit’s early challenges.

"The agency's record has accelerated in very positive ways since then," Rogoff says. "I knew Joni [Earl] had put together a very high-quality team, and that has only been pointed out to me even more so since I’ve gotten here."

Like Rogoff, McMillan recently joined a major city's transit agency in the midst of a significant referendum vote. L.A. Metro will present to voters in November a transportation half-cent sales tax ballot measure for enhancements that include new transit projects, new regional-rail lines, safety improvements and infrastructure revitalization. McMillan understands what Rogoff is going through.

"The challenge [at the local level] isn't that much different from trying to pass major funding initiatives at the federal level, except that you have a better chance to build a supportive constituency for a referendum at the local level compared to the current climate of Washington, D.C.," McMillan says.

Staying on top of repair needs

Transit agencies in Seattle and Los Angeles aren't the only ones experiencing growing pains and congestion. Additionally, deteriorating infrastructure in cities such as Chicago, Philadelphia and Washington, D.C., have made rehabilitation challenges almost insurmountable, partly because transit agencies in those cities did not budget or allocate sufficient resources for recapitalization, according to Rogoff.

"One of the things I am very focused on is making sure that we stay on top of the state-of-good-repair challenge," he says. "I'm working for an agency that’s relatively new, and we need to make sure we’ve adequately budgeted for the recapitalization of assets, so they’re not allowed to deteriorate in a manner we’re seeing happen in other places. That’s one area where I like to think we can be a leader."

If the ST3 plan passes, Sound Transit also will be viewed as an industry leader for showing how agencies can respond to a community’s growing pains, Rogoff believes. The Puget Sound region’s population is expected to increase by as many as 900,000 people by 2045, and ST3 is designed to jump ahead of that growth.

"Certainly getting ahead of growth and giving people real choices is one of the greatest challenges facing the transit industry," Rogoff says, adding that, if implemented, ST3 is projected to quintuple Sound Transit daily ridership to between 561,000 and 695,000 passengers by 2040.

For Rogoff, though, more immediate accomplishments await — such as adjusting to life on the other side of the country. He rides a combination of Sound Transit vehicles and King County Metro Transit buses to and from work each day.

What little free time he has is spent on his family’s transition to a new city.

In early July, he was eagerly awaiting the arrival of his bicycle from Washington, D.C. He’s also planned future outdoor family excursions — even though his wife is working on the Zika virus crisis and isn't sure when she’ll be able to move west.

Although he and his family are far from settled, Rogoff already knows he made the right move.

"I feel at home with an agency like this," he concludes. "It's very satisfying to actually be doing things instead of just talking about them."