Accommodating ridership growth. Maintaining a state of good repair. Investing in modern equipment and new technology. Finding the money to pay for it all.

Those are just some of the major topics and challenges that are keeping today's transit industry leaders occupied, according to surveys the agencies submitted to Progressive Railroading for the 2015 edition of the "Passenger-Rail-At-A-Glance" report. In many respects, the agencies' stated issues and concerns this year are consistent with those cited over the past few years: how to address growth in demand; build new lines of commuter- and light-rail service; maintain a state of good repair; and plan for big-picture infrastructure projects when Congress has yet to pass long-term federal funding plan for transit and passenger rail. 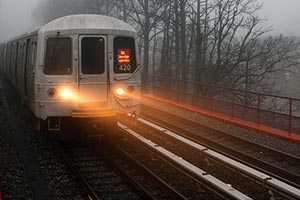 In its 2015 survey of transit agencies, Progressive Railroading asked passenger-rail and transit agency administrators to describe the latest hot-button issues that they’re confronting. Of the 23 agencies that returned their survey, 14 answered that question.

The California commuter railroad noted that its capacity issues are due to five consecutive years of monthly ridership increases — an ongoing development that is putting significant capacity strain on the system. To address the issue, the railroad recently integrated 11 refurbished cars into service, which increased the length of some trains from five to six cars during the busiest travel days. That, however, is just a short-term solution, as ridership numbers are projected to continue growing.

"More and more customers are being forced to stand on Caltrain throughout their commute," Caltrain officials noted. "The long-term solution to Caltrain’s capacity issues is electrification."

Caltrain's electrification project from San Jose to San Francisco is underway and slated to be completed by 2020. Once electrified, the corridor will allow for significant capacity increases in the system.

Like many other agencies, Caltrain is concerned about funding. But its funding issues are complicated by its lack of a dedicated funding source.

"The rail agency cannot rely on revenue generated from sales tax or property tax measures; instead the operating budget is composed almost entirely of farebox revenue and voluntary contributions from Caltrain's three funding partners: the city and county of San Francisco, the San Mateo County Transit District and the Santa Clara Valley Transportation Authority," Caltrain’s survey stated. "The funding allocations from each partner agency are determined by formula, and when those agencies struggle financially — as was the case during the Great Recession — they correspondingly cut their contributions to Caltrain, leaving the rail agency in a particularly precarious state during rough economic times."

As a result, Caltrain is exploring options for creating dedicated funding sources, such as a revenue-generating ballot measure that could go before voters in 2016, Caltrain officials wrote.

Other agencies' responses cited themes that are similar to Caltrain’s. Below is a sampling of their verbatim answers.

Denton County Transportation Authority (DCTA)
"One major thing we are dealing with here at DCTA is the implementation of positive train control. Another key issue we’re dealing with is purchasing and installing new bus shelters/stops in one of our member cities (Denton, Texas)."

Greater Cleveland Regional Transit Authority (GCRTA)
"Unfortunately, due to limited funding sources, our backlog for critical rail projects continues to grow. Some of the 'hot issues' surrounding our rail infrastructure are attaining a state of good repair (SOGR) so that we can continue to provide safe and reliable service to our customers. The rail infrastructure program currently in place addresses various SOGR issues. Our current focus has been ensuring rail stations are ADA compliant, upgrading fiber optic systems, repairing existing track, ballast, cross-ties, drainage systems, surfacing, signals and installation of fasteners."

Metra
"Without question, the biggest trend affecting Metra is a lack of adequate capital funding, an issue that commuter railroads and other mass transit agencies are struggling with across the country. At Metra alone, the capital needs over the next decade are estimated at $11.7 billion; Metra can optimistically expect about a fourth of that from its traditional federal and state funding sources. On top of that challenge is the federal mandate to install PTC, which not only will impact Metra’s capital budget (current estimate is $350 million to $400 million), but will significantly add to its operating costs as well."

Santa Clara Valley Transportation Authority
"The Mountain View double-tracking project has been accelerated. It is a high priority for the agency due to anticipated increase in ridership for upcoming major events related to a new entertainment venue (Levi's Stadium) located in the city of Santa Clara, where Super Bowl 50 will be hosted in February 2016, and the start of BART revenue service at the end of 2017."

Southeastern Pennsylvania Transportation Authority (SEPTA)
"With the new transportation funding in Pennsylvania, as well as the FTA Resiliency Program, SEPTA has almost doubled the size of the capital program within the past two years. As SEPTA continues to rebuild for the future, the challenge continues to be the balance between the renewal of legacy infrastructure and the minimization of customer impacts. SEPTA continues to bring the system to a state of good repair for current and future customers. This balance requires a significant amount of coordination with designers, operations personnel and the maintainers who are responsible for delivering safe and reliable service every day."