The light-rail project is one component of a regional transportation plan Triangle Transit has developed to address the growing population in Chapel Hill, Raleigh, Cary and Durham. The region has grown dramatically in recent years and currently is home to about 1.4 million people. That number is expected to double in 25 years, says TTA General Manager David King.

“There is something about knowing that literally hundreds of thousands of people are coming to your region that tends to focus the mind,” he says.

That’s why, when King joined the agency in 2006 after a 33-year stint at the North Carolina Department of Transportation, he revisited a transit-expansion plan that had been shelved earlier that year. In the early 2000s, Triangle Transit officials were discussing a 27-mile Durham-to-Raleigh regional rail line, over which diesel multiple units would operate along the state-owned North Carolina Railroad Co.’s right of way. The line would serve Research Triangle Park, Cary and North Carolina State University. But as the project worked its way through the Federal Transit Administration’s (FTA) New Starts process, Triangle Transit officials realized it wouldn’t be approved for the federal program. Ridership estimates weren’t as strong as other proposed systems in the United States and the agency did not yet have a local funding match secured. Execs withdrew the agency’s application.

But a new plan began taking shape when King and other Triangle Transit officials met with two local metropolitan planning organizations later in 2006. During an 18-month period, the parties analyzed several corridors for potential rail service, bus service improvements, and development opportunities throughout the three-county region. The regional plan was vetted by a 29-member citizen advisory group that also included business and political leaders in 2008.

The final plan included two light-rail corridors — the 17-mile Durham-Orange line and a 14-mile Cary-Raleigh corridor — as well as a commuter-rail line from west Durham to eastern Wake County. Triangle Transit officials had to seek approval from officials in Durham, Orange and Wake counties to place a referendum on local ballots asking voters to approve a half-cent sales tax to pay for the transit projects and improvements. In 2011, Durham County placed the referendum on its ballot and voters approved the measure. Orange County voters approved a sales tax in 2012, while Wake County has not yet presented the transportation referendum to its constituents. 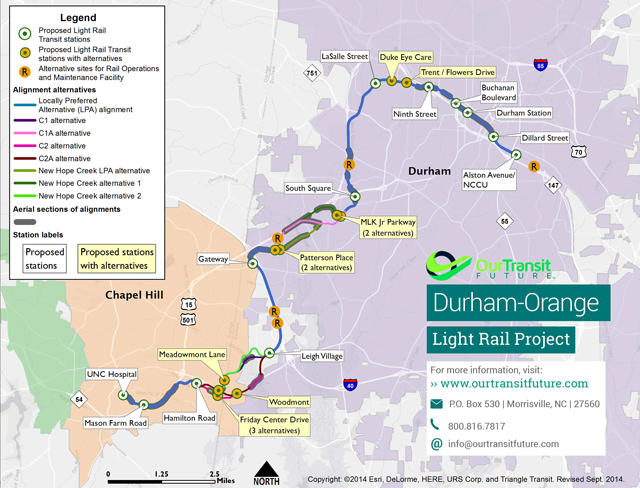 Durham-Orange light-rail project advances
But once Durham and Orange county residents signed off on the measure, Triangle Transit was able to begin advancing the Durham-Orange light-rail project. Officials completed preliminary environmental work and, in December 2013, applied to enter the New Starts program. Two months later, FTA officials approved Triangle Transit’s request to enter the project development phase, which gave the agency the go-ahead to begin developing a Draft Environmental Impact Statement and, later, a Final Environmental Impact Statement. The documents need to be completed by January 2016, at which point Triangle Transit officials hope to obtain a Record of Decision from the FTA.

The $1.34 billion project will include 17 stations and, although there are a few final corridor decisions yet to be made, “by and large, 85 percent of the alignment is set,” says King. And once the project is complete, the light-rail corridor will be more successful than the previously proposed regional rail system would have been, King believes.

Aside from a three-mile segment in downtown Durham where light-rail trains will share right of way with the North Carolina Railroad, the Durham-Orange project will feature a new alignment and “great anchors” with the universities and medical centers, King says.

“The regional rail system was far more oriented towards the peak, with less frequent service and longer distances between stations,” he says.

It also will better meet the FTA’s current New Starts requirements, which in recent years have evolved from placing a heavy emphasis on ridership-based metrics to considering the bigger picture, such as land use, employment near stations and cost effectiveness.

“There is a lot more realization that local planning and attention to station areas will generate ridership, as well as the kind of growth that seems to be favored by a lot of millenials that like the metropolitan lifestyle,” says King. “They’re coming out of our universities — we want to keep those kids here.”

In the meantime, Triangle Transit officials will work with Wake County executives, who several years ago chose not to support the transportation referendum. The county now has a new manager with whom agency and metropolitan planning organization officials are working to refresh the Wake County portion of the plan. Wake County’s financial support is required for the other two proposed rail systems.

The proposed commuter-rail system would operate from West Durham to eastern Wake County, running through downtown Cary, downtown Raleigh, North Carolina State University and the southeast side of Raleigh. It would run parallel to Interstate 40, a highway that is over capacity with no relief in sight, says King.

Triangle Transit’s other proposed corridor would run from downtown Cary to downtown Raleigh. Agency officials initially had suggested light rail as the preferred mode of transit in that corridor, but are now also exploring bus rapid transit options that might be less expensive, says King.

He is hopeful that a referendum would be ready for a spring 2016 ballot in Wake County. With the region growing as quickly as it is, transportation alternatives are needed sooner rather than later.

“We continue to get accolades from any number of publications when they make their lists about the best places to live, the best place to open a business, the best place for millenials and retirees,” says King. “This area has done very well in that area — perhaps too well — and as a result, we are growing at an aggressive pace.”