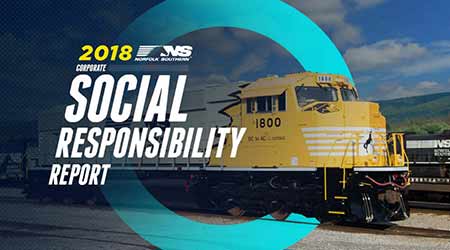 NS improved locomotive fuel efficiency by 5 percent in 2017 over 2016, conserved 23 million gallons of diesel and avoided more than 233,750 metric tons of GHG emissions, according to the report.

The railroad has reduced its GHG intensity by 15 percent since 2010, and lowered absolute GHG emissions for three consecutive years.

"As a freight-rail transportation company, Norfolk Southern has a unique opportunity to help businesses grow and achieve their sustainability goals, such as reducing their supply-chain carbon footprint," said Chairman, President and Chief Executive Officer James Squires in a press release.

Also in 2017, NS:
• reduced electricity use as measured in kilowatt hours by 4 percent and reduced overall energy costs by nearly 3 percent;
• trained more than 8,100 emergency responders on how to prepare for and safely respond to potential transportation incidents involving hazardous materials;
• received the American Chemical Council's Responsible Care Partner of the Year Award for exemplary performance and safety record in the transport of chemical products;
• rolled out its “Tell Me” safety campaign, focused on peer-to-peer safety communications and the company’s goal to achieve zero accidents and injuries; and
• held its first “Inspire! Summit,” a two-day employee workshop to promote diversity and inclusion at the company.

The latest report was the 11th consecutive time that NS published its sustainability accomplishments and challenges. For the first time, the 2018 report includes the annual contributions of the Norfolk Southern Foundation, the company's charitable giving arm.

"Our aim is to provide stakeholders a more complete picture of our activities to support the communities we serve and the role that philanthropy plays in the railroad's sustainability efforts," said Squires.

In 2017, NS and its foundation contributed more than $10 million to nonprofits across the railroad's system, from health and human service organizations to cultural, educational, business and environmental groups.