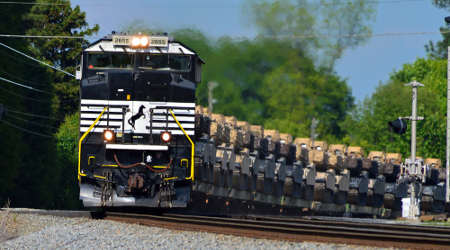 NS is proposing construction of a new headquarters in Midtown Atlanta that would feature 750,000 square feet of office space and a daycare center for employees' children, according to the documents.

The building would be located at West Peachtree Street at Ponce de Leon Avenue and Third Street.

The building project would cost about $575 million. NS would create 850 new jobs and retain 2,025 jobs it already has in Atlanta. The Class I currently has a regional office in Midtown Atlanta.

The documents were released after the Atlanta City Council on Monday approved up to $1.9 million in public financing to CIM Group, a California developer, to redevelop an area known as the Gulch area of downtown Atlanta, the Atlanta Business Chronicle reported.

That redevelopment and NS are linked in that the Class I owns about 16 acres in the Gulch, which consists of parking lots and rail lines. NS is selling its Gulch properties to CIM Group and using the proceeds to invest in its new headquarters, according to the newspaper.

Last month, NS Chairman, President and Chief Executive Officer James Squires acknowledged during a third-quarter earnings conference call that the company is considering moving its corporate headquarters to Atlanta. The sale of its downtown Atlanta real estate is essential to that decision, he said.