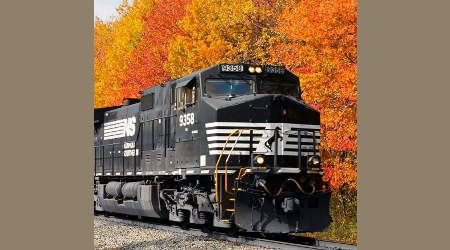 Those declines were offset in part by intermodal growth that eclipsed effects from the restructuring of the Triple Crown unit in 2015, according to an NS press release.

Also in fourth-quarter 2016, NS reported general merchandise revenue declined 1 percent to $1.5 billion compared with a year ago. Volume was down 3 percent overall, as growth in steel and agriculture was offset by declines in energy, vehicles, paper and forest products.

The company's railway operating revenue for the year fell 6 percent to $9.9 billion compared with a year ago. NS cited a 3 percent volume decline due to cuts in energy-related markets, the Triple Crown restructuring and reduced fuel surcharges for the reasons behind the operating revenue decrease in 2016.

NS improved customer service in 2016 "while positioning the company for further growth in 2017 and beyond," Squires added.

"We are poised to continue building on our success and deliver an additional $100 million of productivity savings in 2017 on the way to our goal of $650 million of annual savings by 2020," he said.