RailTrends 2016 promised provocative questions and the hint of some emerging answers within the context of an eclectic, silo-busting forum focused on the intermediate-to-longer term in a world of increasing short-termism. We think we delivered: 25 presentations and no recitations of quarterly results. Instead, there was detailed discussion of future strategies, asset deployments and redeployments, and future share gains.

We may be entering a transitional period of loathing and fear, making longer-term capital planning even more difficult than it already is. But at RT16, we saw areas where railroads can control their own destiny (service, productivity, safety and a real change in data usage), and initiate another period of revival and regeneration, assuming they work hard now.

Political uncertainty. No doubt, the election surprise upended some things. During the government/trade association panel that kicks off RT every year, there were more questions than ever. The panel revealed some hope for regulatory reform, and noted that railroads are huge taxpayers and would benefit perhaps disproportionately from a lower corporate tax rate. I think business-to-business regulation is not on the agenda, but there will be a delay in anything that’s pending — as the AAR’s Ed Hamberger pointed out and STB’s Dan Elliott tacitly agreed — until the new administration’s policy is revealed and the new five-person STB is staffed. The anticipated “infrastructure boom” was taken down a peg by NRC’s Chuck Baker, whose construction members would benefit the most: President-Elect Trump’s privately financed, 10-year plan would involve an increase in government spending of only $13-14 billion.

The politics of fear? Regarding trade implications and the notion of “tearing up NAFTA”: Kansas City Southern clearly is caught in the crossfire, but Mexican growth is important to Union Pacific, BNSF and, indirectly, all roads. Opening up NAFTA would open up issues on both U.S. borders. 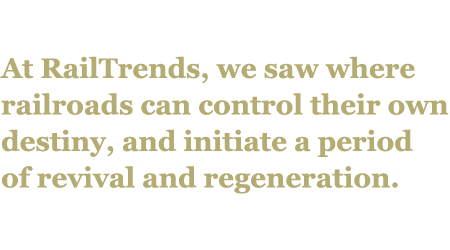 KCS’s Pat Ottensmeyer — interestingly, not unlike Amtrak’s new CEO Wick Moorman, who also spoke at RT — noted that while he has some contingency plans, his railway was proceeding with business as usual. What else can you do?

Deus Ex Machina? Just as the intermodal world appears to be returning to a more standard growth form and with more truck driver regulations coming in 2017, here comes the specter of driverless trucks — imagined, feared but rarely explored. Oliver Wyman’s Rod Case noted that truck power is replaced starting after three years. The technology can be installed much quicker in trucking than rail, and then brought into play on newly created toll roads — perhaps 40,000 tractor/trailers (or 100,000 doublestacks in one direction) a day. What can railroads do? Focus on cost and service — and get their mojo back with technology.

Fear and/or fear itself. The New Deal for railroads is already out there; with normal trade patterns, it’s all around us. With or without an export push, it’s coming from increased plastics production centered on the Gulf Coast, as I have long argued and was confirmed in part by UP and KCS — and by John Barrett, supply chain GM for Chevron Phillips, which is making more than $500 million in rail-related investments (rail, cars, storage yards).

It will come — from a variety of targets. That includes increased short-line business — strategic creations or organic growth, as Watco’s Rick Webb and Genesee & Wyoming’s David Ebbrecht told us. Of course, it will be led by intermodal, as CSX VP Intermodal Dean Piacente reaffirmed. CSX sees 9 million domestic loads up for grabs in the East. And it will really come from the new point of the spear: the old “merchandise” segment, or carload, manifest or industrial products business. Norfolk Southern VP of Industrial Products Mike McClellan is scouting for new fields of growth — and a few old fields for renewed growth. It’s a “target-rich environment” — 50 million truck movements of 500 miles or more are potentially available, he believes. Unlike the intermodal marketing “corridor” programs, IP growth shouldn’t take much increased capex.

Can it be done? It is being done — by CN. In recently retired CEO Claude Mongeau’s remarks (he received our 2016 Railroad Innovator Award) and in those of his successor, Luc Jobin, we see how CN serves as a model for success. Leveraging the low-cost model developed by his predecessors, adding a soupçon of “kindler/gentler,” a big ration of technology and an effort to better understand their customers and “move up the supply chain,” CN has consistently outgrown the economy and the industry. It can be done.

Tony Hatch is an independent transportation analyst and consultant, and a program consultant for Progressive Railroading’s RailTrends® conference. Email him at abh18@mindspring.com.