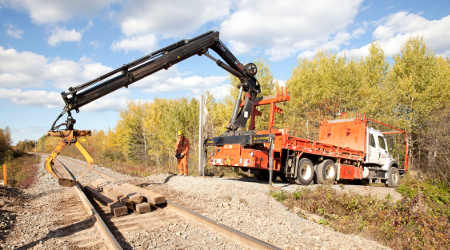 2017 MOW budget: $2.4 billion
2016 MOW budget: $2.6 billion
Reasons for decrease: “Each year, we seek to establish a capital plan that reflects the future needs of customers and the constant need to keep its infrastructure in good working condition. This year’s capital plan ensures the railroad continues to operate a safe and reliable network while capturing the new opportunities presented to it.”
Rail: Replace or install 600 miles, all continuous-welded rail (CWR).
Double track: About 16 miles of new double and triple track are planned along the network.
Grinding/surfacing: Total of 20,000 miles.
Ties: Replace or install 2.7 million wood and 140,000 concrete ties.
Ballast: Install 5.1 million net tons.
Bridge work: This year’s capital plan includes the continuing replacement of bridges in Memphis, Tenn.; Bosworth, Mo.; and Media, Ill. 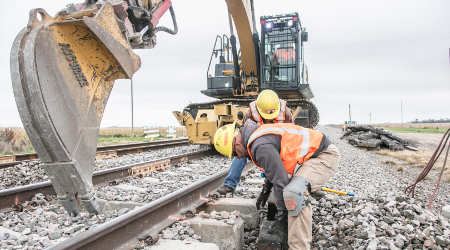 2017 MOW (roadway) budget: About $250 million
2016 MOW (roadway) budget: About $260 million (based on 11 percent of 2015 revenue totaling $2.4 billion that was invested in maintenance work in the U.S. and Mexico)
Reason for budget decrease: “Due to positive investments made in previous years to the overall track infrastructure.”
Rail: Replace or install 128 track miles in the U.S. and Mexico, all CWR.
Ties: Replace or install 645,000 ties in the U.S. and Mexico.
Track project: Replace 24 miles of rail and 70,000 ties, and improve 56 grade crossings between DeQuincy and Hornbeck, La., $25 million, began in February and slated for completion in early April.*
Facilities: Projects to be completed in 2017 include enhancements and upgrades to Sanchez Yard in Nuevo Laredo, Mexico, a 3-year project; construction of a storage-in-transit yard for Sasol Chemicals LLC in Lake Charles, La.; and an expansion of a rail-car classification yard in Mossville, La.
* Information from a press release issued Jan. 31

2017 MOW budget: $68.7 million
2016 MOW budget: $76.4 million
Reason for budget decrease: “The past years have included a strong investment in roadway maintenance with a focus on an increase of infrastructure. In 2017, the company plans to continue with a path of the infrastructure program, with an emphasis on maintenance of the railroad.”
Rail: Replace or install 55.6 miles, including
29.2 miles of CWR and 26.4 miles of continuous-welded recovery rail.
Double track: Some “important projects” that are not included in MOW are the Juarez-Meseta double track in Ciudad Juarez, 1.7 miles, $1.8 million; UNIVEX-Salamanca double track in Guanajuato, 3.4 miles, $5.4 million; and the Piedras Negras-Rio Escondido double track in Coahuila, 4 miles, $7.3 million, which will be completed in 2017.
Sidings: Work on 3 sidings in Altamira Tamaulipas totaling 6.9 miles (3 miles of new and 3.9 miles of rehabbed sidings); and build 1 siding in Monterrey, Nuevo Leon.
Grinding/surfacing: Budget of $3 million.
Ties: Replace or install 297,000 concrete and 170,000 wood ties.
Ballast: Install 1.02 million tons.
Bridge work: Rehab 77 bridges with budget of $3.3 million, started in January and slated to finish in December (not included in MOW program). Also complete rehab work on 202 bridges with budget of $4.1 million.
Facilities: Reconfigure Monterrey Yard, $22.2 million; build supply area in Rio Escondido, $7.9 million; and install 2 diesel storage tanks, one in Torreon with 3.2 million-liter capacity and one in Ciudad Juarez with 1.2 million-liter capacity, $700,000.
MOW equipment to purchase or lease: Purchase 1 TrackStar ($3.6 million), 1 ultrasonic inspection vehicle ($3.1 million) and 1 EMC truck for short movements ($1.5 million).
Unusual projects: Work on 2 bypasses (not included in MOW program), one 13.1 miles long in Monterrey with a 2017 budget of $1.8 million that will conclude in 2018, and one 15.5 miles long in Celaya-Irapuato with a 2017 budget of $1.8 million that will conclude in 2019.