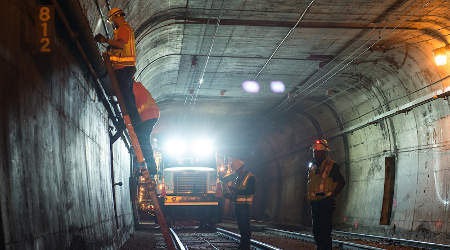 During the tunnel closure, the agency updated tracks, walls and drainage systems to "keep up with the demands of the Muni system," SFMTA officials said in a press release. The new tracks will enable the agency to lift a speed restriction in the tunnel.

The updated infrastructure also supports running two-car trains along the K/T Line for added capacity, according to an agency blog post.

In addition, workers installed four track crossovers to enable trains to switch from one track to another during delays. The crossovers are expected to boost overall train operations by adding flexibility.

The project cost $40 million, according to the SFMTA's website.

This fall, there will be two weekend overnight closures at the Forest Hill Station in the tunnel and three nearby stops so that crews can complete additional electrical upgrades.