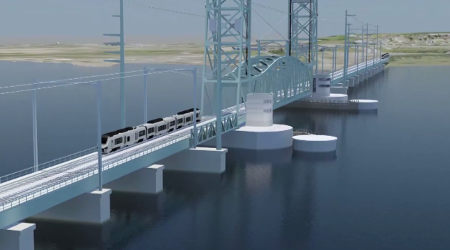 NJ Transit this month will begin the final design plans, which are slated to be completed by the end of 2018.

Built in 1907, the bridge carries NJ Transit's North Jersey Coast Line trains over the Raritan River between Perth Amboy and South Amboy, New Jersey. Each day, those trains carry nearly 10,000 riders across the bridge, which is also used by Conrail.

The new bridge will be on an alignment adjacent to the existing structure, which was damaged during Hurricane Sandy in 2012. NJ Transit will use new materials that can withstand ocean surge forces and saltwater immersion, agency officials said in a press release.

The new structure will feature reinforced concrete piers, a new steel superstructure, and a new drive motor and electrical controls.

The Raritan River Bridge replacement project is being funded by a $446 million grant administered through the FTA's emergency relief program for resilience projects.