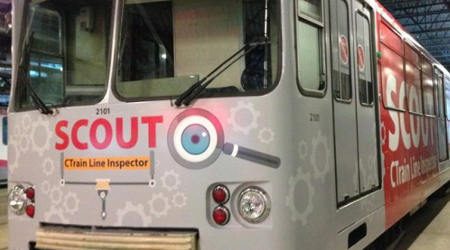 Dubbed "Scout," the unit is a retired CTrain car that's been redesigned to record data about rails, tracks and overhead cables as it travels along the agency's light-rail system.

Calgary Transit is deploying the car to determine where repairs may be necessary to improve light-rail reliability and safety, agency officials said in a press release.

Using invisible laser beams, special cameras and GPS coordinates, Scout can detect where improvements or repairs are needed. The lasers and cameras under the vehicle can detect the shape of rails, how much wear they've sustained and whether track is level or tilted.

The car will eliminate some of the visual and mechanical inspections performed by staff.

However, crews will continue to manually maintain and inspect certain infrastructure components, such as switches, sliding rails and rail lubricators.

Scout will be driven by an experienced CTrain training officer.