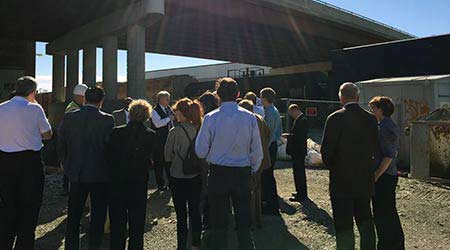 A $41 million overpass developed to eliminate a traffic conflict point between trains and motor vehicles in the Chicago area was opened last week by Chicago Region Environmental and Transportation Efficiency (CREATE) program officials.

The new 25th Avenue overpass in Bellwood, Ill., accommodates two lanes of traffic in each direction over Union Pacific Railroad tracks that accommodate up to 59 Metra trains and 52 freight trains daily. The grade separation was a project of the CREATE program, a public-private partnership formed to improve the efficiency of freight, commuter and intercity rail, as well as the entire transportation network through the region.

On average, 19,000 motor vehicles traveled through the stretch of 25th Avenue in Bellwood daily. Prior to the overpass construction, about 3,500 of those motor vehicles were being stopped by trains every day, resulting in 28,400 annual hours of motorist delay, according to a CREATE press release.

"Union Pacific is thrilled to commemorate the opening of the 25th Avenue grade separation — an enhancement that benefits motorists, Metra commuters and freight railroads," said UP Assistant Vice President Liisa Stark. "We commend the involved parties for their collaboration and commitment, and look forward to continued success on future CREATE projects."

The railroad overpass project was made possible by a $22.2 million contribution from the Illinois Department of Transportation, $2.4 million from villages of Bellwood and Melrose Park, and $16.4 million from federal, railroad and other state sources. Construction started in September 2014.

"This project, many years in the making, will benefit all residents by serving as a conduit for economic development, quicker emergency vehicle response times and a safer traffic flow," said Bellwood Mayor Frank Pasquale. "This is much more than a railroad overpass. This is a bridge to a better quality of life for our communities."