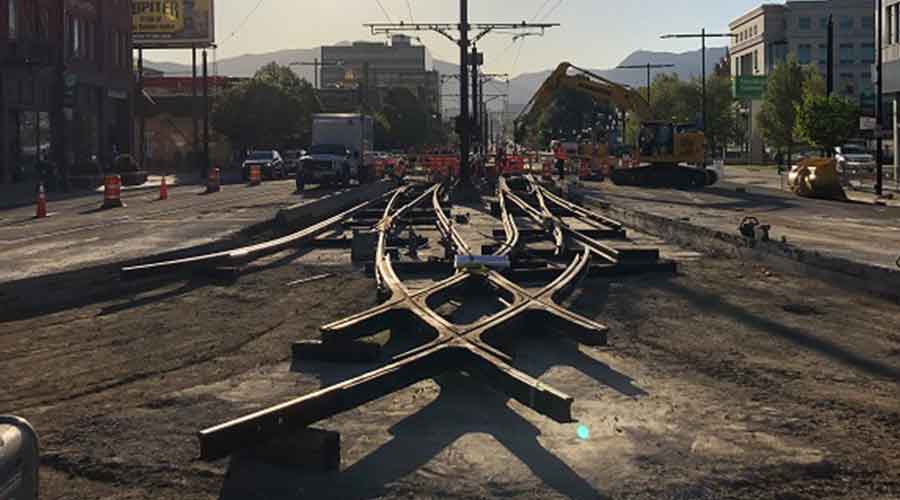 In May, the Utah Transit Authority (UTA) completed one of its largest construction projects over the past 10 years, and in a speedy fashion.

The agency replaced 18-year-old tracks and switches at two Main Street locations in 27 days, work that typically would take two months to complete.

Project planning began two years ago with the city of Salt Lake City, Utah Department of Transportation, Downtown Business Alliance and Davis Chamber of Commerce to determine traffic modeling, construction windows and impacts to area businesses and residents. The period from May 4 to June 2 was chosen for the project because construction would fit between the University of Utah graduation ceremony and a Pride Festival, UTA officials said in a blog.

The first phase of work began May 4 with the demolition and excavation of the east, west and north tracks at the two Main Street locations. Construction was scheduled to last until May 21, but was completed two days earlier, UTA officials said.

The second phase expanded from a 400 South to 150 South location and the third phase, which began on May 27, involved a lot of work.

"It is amazing to think that in four days, construction crews completed removing and rebuilding four more sets of tracks," UTA officials said. "Riders, drivers and local businesses returned to business as usual on June 1, with every TRAX station and road open."

During the project, more than 150 volunteers helped guide riders to their next destination, 118,000 water bottles were distributed, and the customer service department received 11 positive calls and only six complaint calls, they said.

The UTA is planning two more construction closures this summer: one from June 29 to July 7 to replace more 18-year-old switches and one on July 14 to replace damaged electrical poles.