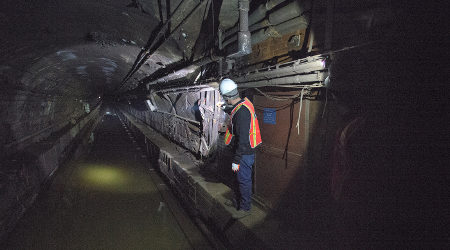 Starting in April 2019, the L line subway tunnel will close for 15 months to repair damage caused by Hurricane Sandy in 2012. The tunnel carries L trains under the East River between Brooklyn and Manhattan.

While L trains will continue operating throughout Brooklyn during the tunnel closure, NYCT will provide a "variety of transportation options" for residents traveling to and from Manhattan, said President Andy Byford in a press release.

"The L Train reconstruction project represents the most massive undertaking I’ve ever been a part of in my career in transportation, but it’s also spurred some of the most innovative and collaborative work I’ve ever been a part," he said. "We want to use this town hall to answer any questions or concerns people have and make sure everybody’s ready for 2019."

The meeting will include details about track and signal maintenance being carried out on weekends to ensure the L line is reliable during the tunnel reconstruction.

During the closure, NYCT will boost capacity on its G and C lines with additional cars. The agency also will provide free out-of-system MetroCard transfers between the Livonia Avenue L station and the Junius Street 3 line station.

The Canarsie Tunnel suffered extensive damage to track, signals, switches, power cables and other infrastructure during Hurricane Sandy in October 2012. In April 2017, the Metropolitan Transportation Authority's board approved a $492 million contract with Judlau Contracting Inc. and TC Electric to repair the tunnel.

The project was originally estimated to take 18 months, but the contractors pledged to finish it in 15.