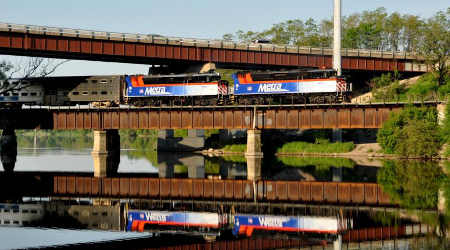 Metra's board yesterday approved a $21.6 million contract to replace a 136-year-old bridge over the Fox River along the Milwaukee District West Line in Elgin, Illinois.

The contract was awarded to Illinois Construction Corp., the lowest bidder. The $34 million project involves replacing the existing single-track bridge with a double-track one built to modern standards, Metra officials said in a press release.

The contract covers the bridge structure, with Metra forces building and installing the project's track and signal elements.

The commuter railroad previously received a $14 million Transportation Investment Generating Economic Recovery (TIGER) grant for the project. Metra will provide an additional $14 million for the project, while Canadian Pacific will pick up the remaining $6 million.

Construction is slated to begin in the fourth quarter and take about three years. Located 35 miles from downtown Chicago, the Fox River bridge carries 54 Metra trains and up to eight CP freight trains each weekday.

The bridge was originally built in 1881. Although the structure has been regularly maintained, many components are significantly deteriorated and can no longer be economically repaired, Metra officials said.

Each of the five strategic goals are linked to a set of initiatives, with measures that will be used to evaluate Metra's progress.

The plan is intended to be a roadmap taking the railroad from where it is today to where its leaders would like it to be in five years, Orseno said.

"I want to caution that the plan may be less ambitious than expected," Orseno added. "That is a result of our chronic funding shortfalls, which severely limit our ability to improve the agency."

The public and other stakeholders are invited to submit comments on the draft of the plan until Sept. 30. A final plan will be presented to Metra's board in November.