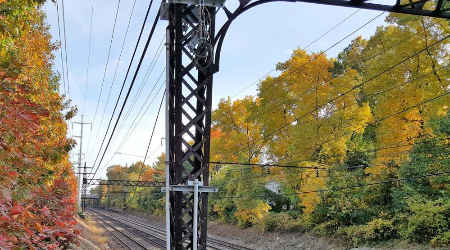 The Connecticut Department of Transportation (CTDOT) has awarded a $237 million contract for two MTA Metro-North Railroad track projects to a Cianbro-Middlesex joint venture.

The joint venture will serve as the construction manager/general contractor for the projects. The team was given a notice to proceed yesterday, with construction expected to begin in late September and continue for three years.

The first project — known as the CP243 interlocking — involves construction of a new four-track interlocking on Metro-North's New Haven Line between the East Norwalk and Westport stations.

Crews will install six new switches and crossover tracks, realign 6,200 feet of track and modify overhead catenary. New drainage will be installed on the north and south sides of the tracks.

The other project, called the Danbury Branch Dockyard, involves improving and electrifying the southern portion of Metro-North's Danbury Branch line. Trains are stored and staged at the dockyard when not in use on the main line.

The improvements will enable commuter trains that begin or end in Norwalk, Connecticut, to switch direction, CTDOT officials said in a press release.

Although the two projects are independent of the replacement of the 121-year-old Walk Railroad Bridge over the Norwalk River, the work will help improve the dependability of the main line during construction of the new bridge, officials said.

Sequencing of the work will allow for continuous use of two of the four tracks running through that section of the New Haven Line.