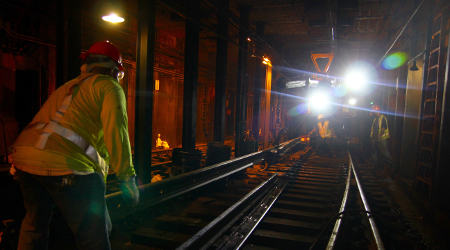 The work will require the agency to close the Center City tunnel July 7-17. During the closure, crews will work around the clock on maintenance and construction tasks, including installation of new trolley wire.

"We still have some work to do to bring the tunnel into a state of good repair, but the previous blitzes have allowed us to reduce the number of days the tunnel is closed for service," he added.

For the upcoming blitz, SEPTA crews will remove and replace 1,000 feet of wood protection board, which is part of the system attaching overhead wire to the tunnel ceiling.

Track department workers will replace the curved rail and rail clamps on a portion of the westbound side of the tunnel. Frogs and rails at the intersection of Chester and Woodland avenues also will be replaced.

Other work to be completed includes track-wire installation for newly installed rails, electrical switch testing, switch maintenance at the Ludlow Interlocking, graffiti removal, track bed cleaning, and the testing of emergency generators and lights throughout the tunnel.

SEPTA's trolley tunnel blitz projects are part of a larger capital program to rebuild and repair major components of the agency's system. The program is funded through Pennsylvania Act 89, which provides money for transportation projects in the state.