The Southeastern Pennsylvania Transportation Authority (SEPTA) next month will kick off another "trolley tunnel blitz" to perform maintenance and construction tasks on a section of track used by several trolley routes. 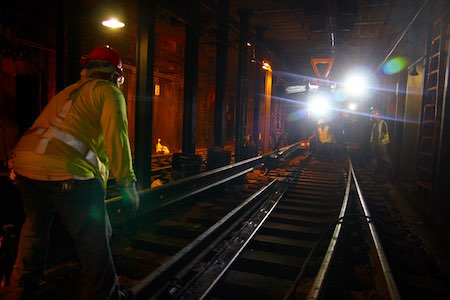 Crews perform maintenance work in a trolley tunnel.
Photo: SEPTA
Beginning July 8, the agency will close the Center City tunnel between 40th and Market Streets so that more than 400 crew members can complete around-the-clock maintenance work, SEPTA officials said in a press release. The action marks the fourth consecutive summer that the agency has held a trolley tunnel blitz.

The work includes removing and replacing 1,500 feet of wood protection board, which is a part of the system attaching overhead wire to the tunnel ceiling. In addition, SEPTA's track department will replace 30-year-old track on a portion of the westbound side of the tunnel.

Other actions will include signal and wire reliability work throughout the tunnel; critical maintenance tasks and component replacement at the substation. In addition, graffiti removal, tile repair, painting, and testing of emergency generators and lighting will be performed.

The tunnel will remain closed until July 18.

"Since the first trolley tunnel blitz in 2013, our crews have replaced switches and thousands of feet of rail and overhead contact wire, and undertaken an aggressive improvement and cleaning program at the trolley stations," said SEPTA General Manager Jeffrey Knueppel. "However, we still have work to do to bring the tunnel into a state of good repair."

Funded through Pennsylvania Act 89, the trolley blitz is part of the agency's "Rebuilding the System" capital program.