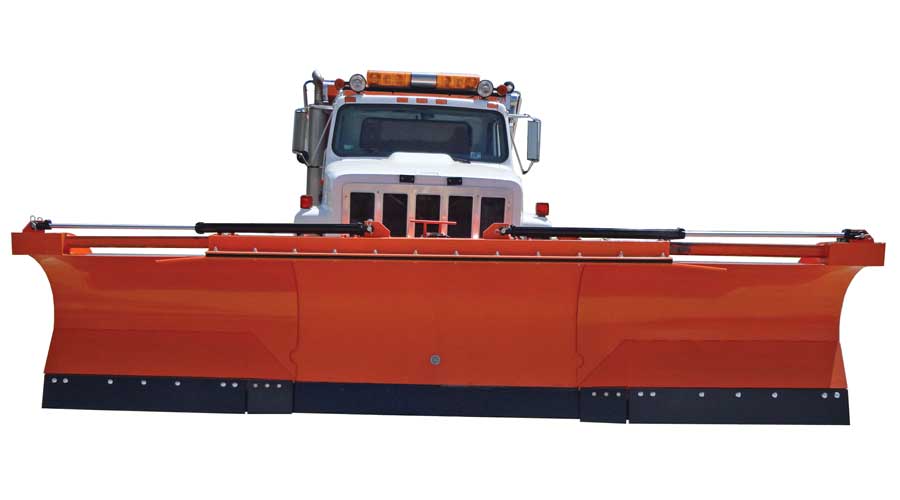 As part of a $100 million renovation project, the Broadmoor Manitou & Pikes Peak Cog Railway in Colorado ordered a snowblower capable of cutting through snow drifts up to 10 feet high and 20 feet wide.

It’s designed to plow through 4,200 tons of snow per hour and blow it up to 100 feet away. Produced in Switzerland by Zaugg AG Eggiwil, the snowblower is slated for delivery in spring.

The recent purchase underscores railroads’ need for effective snow-fighting equipment to combat harsh winter conditions. Heavy snow can block or hinder track, and emergency or required equipment maintenance can be difficult or nearly impossible to perform in the cold and snow.

Progressive Railroading contacted numerous equipment suppliers to learn how their new or upgraded machinery can help railroads overcome winter challenges. Following are emailed responses from 11 of them.

Flink Co. aims to maintain and exceed customers’ plowing and material spreading expectations for snow and ice solutions now and and for years to come. One example of this mission is the design and manufacturing of the FXP plow.

With fingertip controls, the operator/driver can expand the 11-foot plow to 14 feet to the left or right, and to a maximum width of 17 feet with both extensions out. The out-front plow provides the operator/driver with better visibility and safety, and greater control.

The FXP’s weight ensures the plow scrapes to pavement for one pass, which is great for snow, ice and hard packs, Flink officials said. The 11-foot plow makes it easier and safer for a driver to get to and from a work site, and expand it to a desired width. 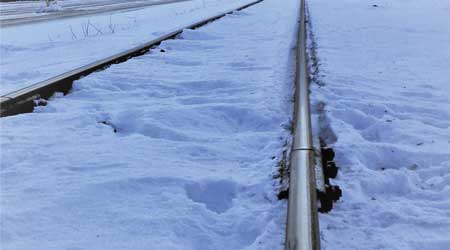 Snow and ice buildup, low temperatures and excessive road salting can decrease train detection systems’ reliability, uptime and safety. Frauscher Sensor Technology’s axle-counting systems are designed to be unaffected by snow, ice, road salt or temperatures as low as -40 F, according to the company.

Inductive and contactless IP68-rated wheel sensors are water- and dust-proof, and proper functioning is not dependent on shunting of rail, thus providing a fail-safe operation even in deteriorated track conditions, Frauscher officials said. A highly reliable train detection system also is particularly crucial at grade crossings, where road salt can lead to activation malfunctions, delays or blocked crossings.

Frauscher’s axle-counting systems offer a maintenance cycle requirement of once every two years, so scheduling can be avoided during winter. 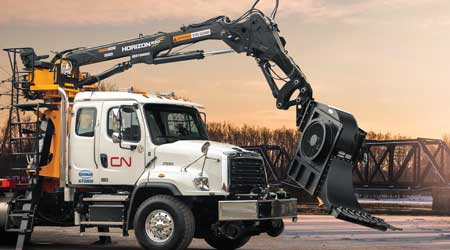 The Storm Wizard is a hi-rail truck equipped with a cold-air blower mounted on the end of a boom to blow snow off switches and yard track.
Geismar North America

The Storm Wizard — a hi-rail truck offered by Geismar North America for fighting snow — is equipped with a cold-air blower mounted on the end of a boom that blows snow off switches and yard track at 300 mph.

The blower is radio-controlled, allowing an operator to carry out the task from the comfort of the cab. Available the past few years, the Storm Wizard offers the flexibility of traveling over the road or by rail.

One of the biggest complaints about dedicated snow-fighting equipment is that it sits dormant after winter, Geismar officials said. By contrast, the Storm Wizard can be converted to summer mode as a boom truck by moving the crane to the vehicle’s rear and removing the blower.

Geismar is exploring other applications for the Storm Wizard, such as an ability to blow leaves, pine needles and coal dust from track for ground-penetrating radar passes or to obtain unobstructed tie evaluations. 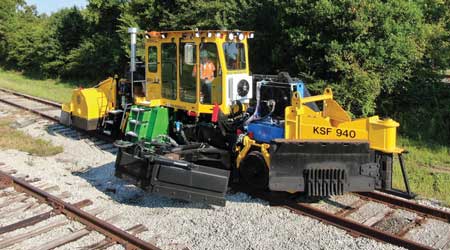 Dual 8D batteries offer high-cranking power for cold-weather starts, and the unit can be used as a four-season plow for snow or ballast. High capacity, 36-inch snow wings can clear snow 16 feet from the track center, while the two-stage blower can discharge snow 30 feet to either side.

Midwest Industrial Supply Inc.’s anti-icing products are up to 10 times more efficient than other deicing products, and can outperform rail heaters to melt falling snow, and prevent both ice buildup and switch freezing, company officials said. The products are effective in temperatures down to -70 F and are environmentally friendly. 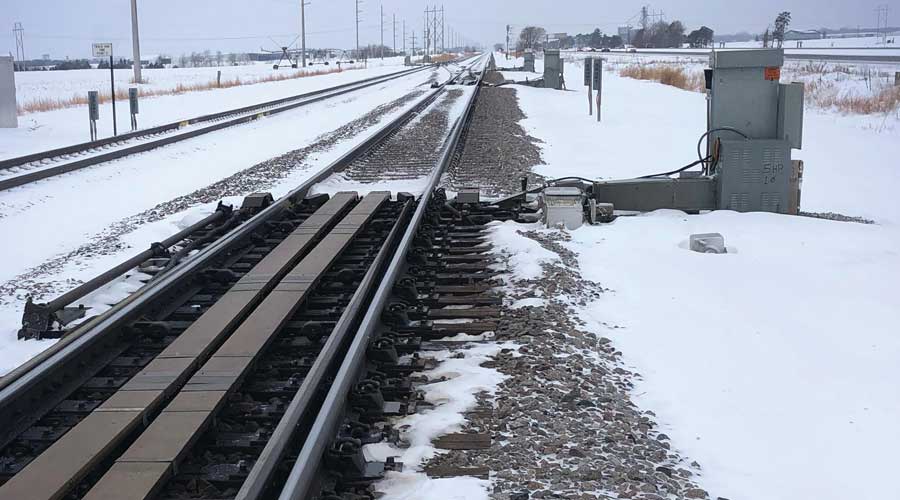 The company’s products are effective in temperatures as frigid as -70 F.
Midwest Industrial Supply Inc.

Meanwhile, Midwest Industrial Supply’s ice-free switch anti-icing agent can be applied to railroad switch points, plates and rail before a snowfall. It stays in place and activates when needed to prevent switches from freezing, company officials said. The agent’s high viscosity also stops runoff during application and helps keep it applied to vertical surfaces.

Pettibone’s Speed Swing 445F rail crane is now available with the CreepDrive™ system from Poclain Hydraulics. The optional feature enables the crane to accommodate high-flow hydraulic attachments and operate at a slower independent travel speed on or off the rails, Pettibone officials said. 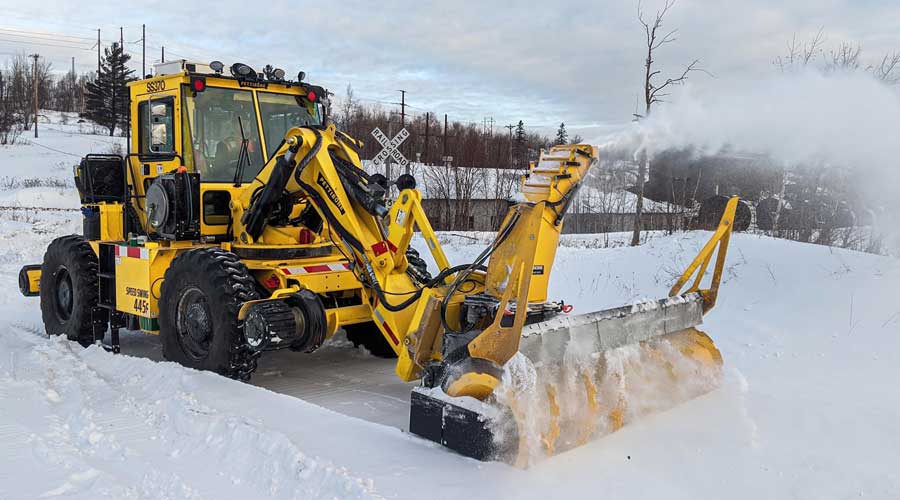 The Poclain CreepDrive is a hydrostatic driveline motor that can be clutched. When the operator engages the CreepDrive, the Speed Swing’s mechanical transmission shifts into neutral.

A display interface is then used to raise and lower engine RPMs, providing the necessary hydraulic flow (up to 33 gallons per minute) to run high-flow attachments. At the same time, the operator can control the CreepDrive with an integrated rocker pedal, which moves the machine forward or backward. 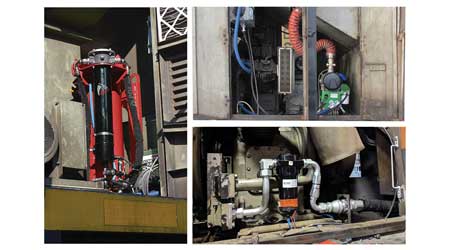 The U.S. Environmental Protection Agency SmartWay-verified technology can heat and circulate water or coolant through a locomotive engine block and cooling system to maintain a temperature above 100 F even in the coldest temperatures, they said.

PowerHouse is available in three compact models with remote-monitoring capabilities.

The company’s Diesel Dehydrator is an engineered system designed to remove water and filter particulate from diesel fuel. It can remove 99.5% of water from the fuel, and increase fuel injector lifespan and overall performance, PDI officials said.

Meanwhile, the company’s proprietary Compressed Air Water Separator is a drop-in solution that creates an effective system working in concert with standard locomotive air dryers to remove water from the system for proper locomotive function, they said.

Rails Co. offers a complete line of snow-removal equipment, including five types of switch heaters, snow detectors and automatic control systems. The company also has introduced a wireless control and monitoring system, and all switch heaters are available for dispatcher control or automatic operation. 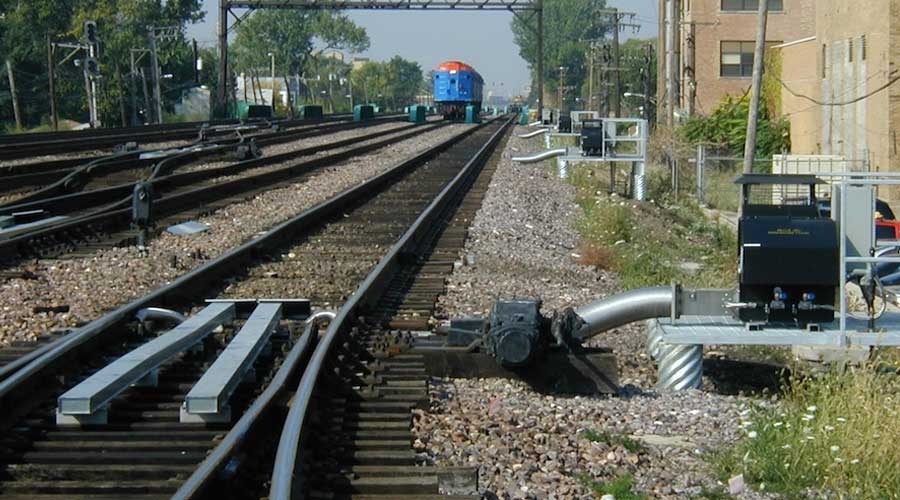 The five-horsepower Hot Air Blower (HAB) Switch Heater has been upgraded with a more powerful high-pressure blower that distributes high-velocity, high-volume hot air throughout the switch area via ducts and nozzles that keep the switch open and operable even in severe winter weather, company officials said.

With double the volume of hot air than previous blower models, the unit also is equipped with user-adjustable high/low BTU output to minimize fuel usage, as well as a variable timer-based high/low flame control that is adjustable to each application, they said.

The tubular Electric Switch Heater (ESH) is designed and built for efficiency, reliability and low-cost operation, regardless of whether switches and rails are covered in wet and heavy snow, light and fluffy flakes or ice. Standard heaters for switches up to 45 feet long are rated from 100 watts to 500 watts per foot.

Both HAB and ESH systems can be combined with Rails’ wireless 900-MHz radio control system and a secure VPN router to provide wireless control and monitoring of the heaters. 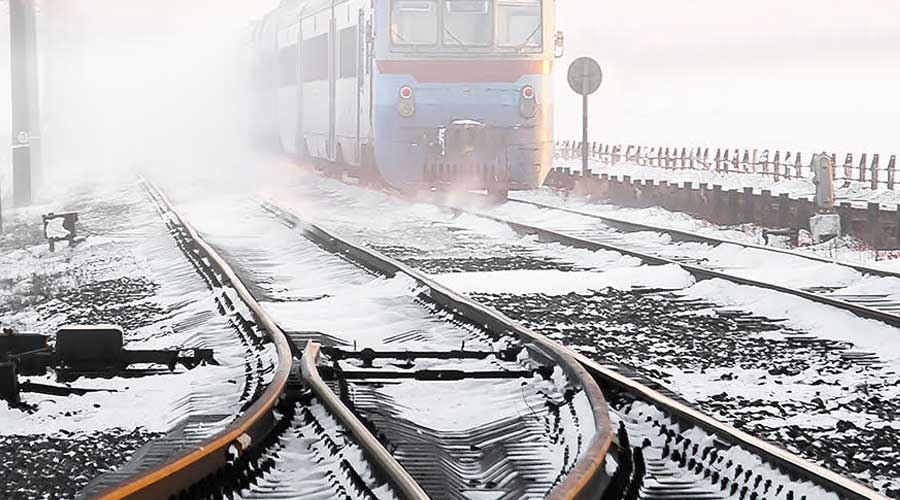 REC continues to invest in its snow-melting and monitoring equipment. Last year, the company improved its lap switch and swing nose frog design, and increased nozzle airflow and the durability of control modules and the AC drive. In addition, REC reduced the electric blower’s footprint and maintained its maximum heat for transit applications. 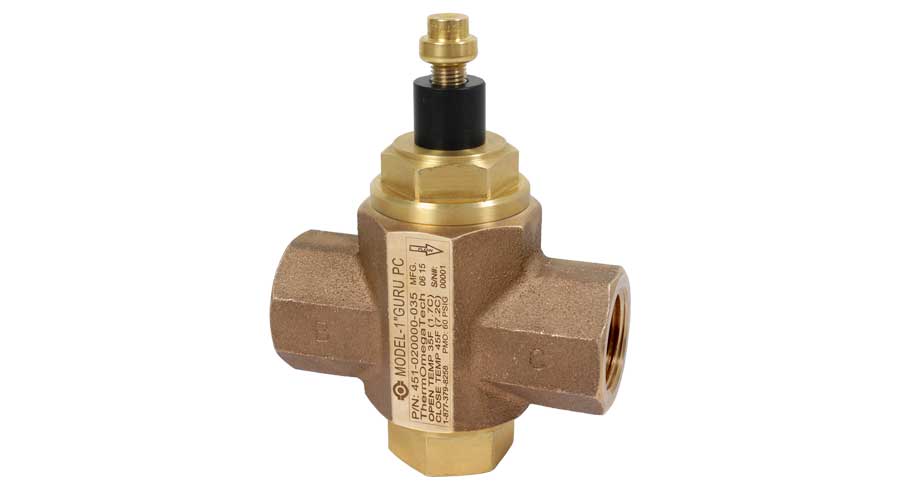 The GURU PC is a thermostatic freeze-protection valve for passenger cars.
ThermOmegaTech Inc.

The company offers thermostatic freeze-protection valves with its GURU® flagship line of products. The GURU Plug is tailored for water-cooled locomotives. Installed on a locomotive’s engine coolant water-storage tank, the valve’s internal actuator senses water temperatures. When the locomotive is turned off and water temperatures fall toward freezing, the valve is designed to pop open to drain the system before freezing can occur.

The GURU Plug requires no electrical or air connections to operate and continually monitors water temperature.

The GURU PC is a thermostatic freeze-protection valve for passenger cars. Installed at the lowest point in a passenger car’s potable water-bearing system to prevent freezing when the cabin heat is turned off, the valve is designed to monitor ambient temperatures. It will automatically open and drain the system if an air temperature drops to the valve’s set point, helping to prevent frozen tanks and pipes, ThermOmegaTech officials said. 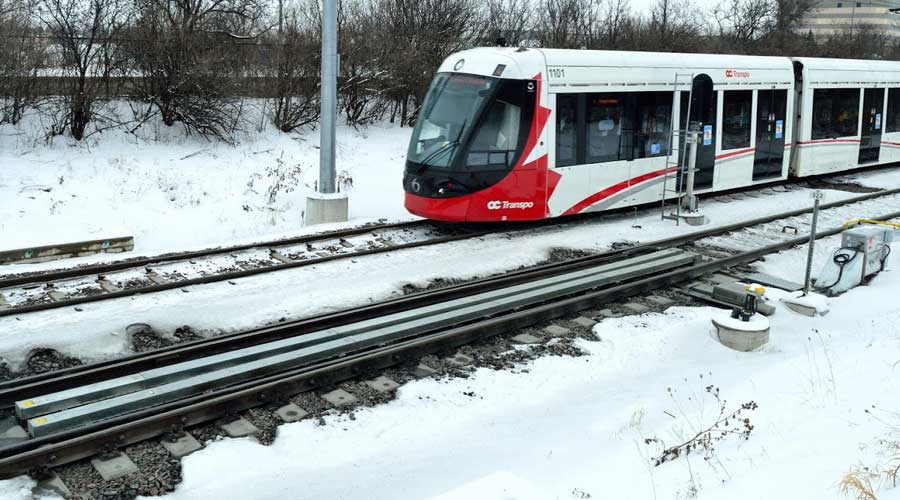 The 5-horsepower, gas-fired Hellfire heater delivers airflow at high velocities and is designed for locations where high winds and heavy snowfall are common.