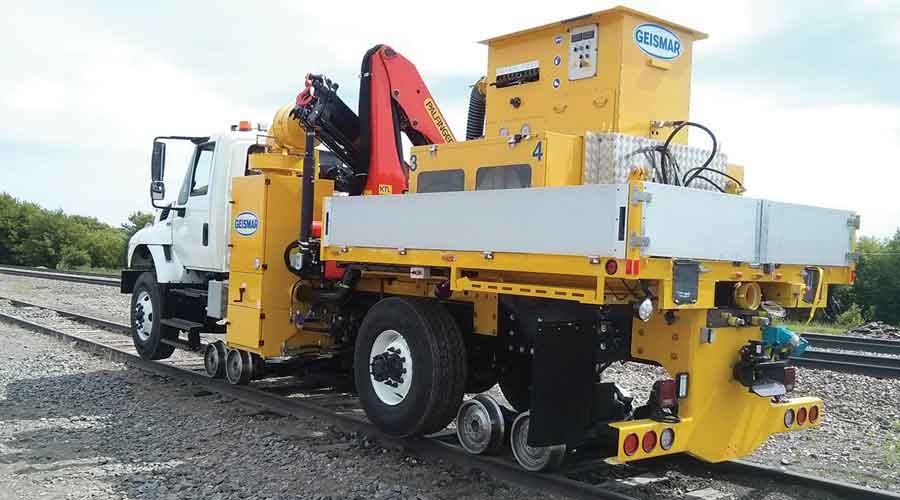 The Metal Wizard also helps control corrugation, provides preventive grinding for gauge corner cracking and can de-carbonize to help ensure proper signaling. The hi-rail capability allows for access to the rail system from several points, and minimizes travel time on the rail. Equipped with a hydrostatic drive, the Metal Wizard moves forward and in reverse at equal travel speeds. The unit also can be equipped with a crane. 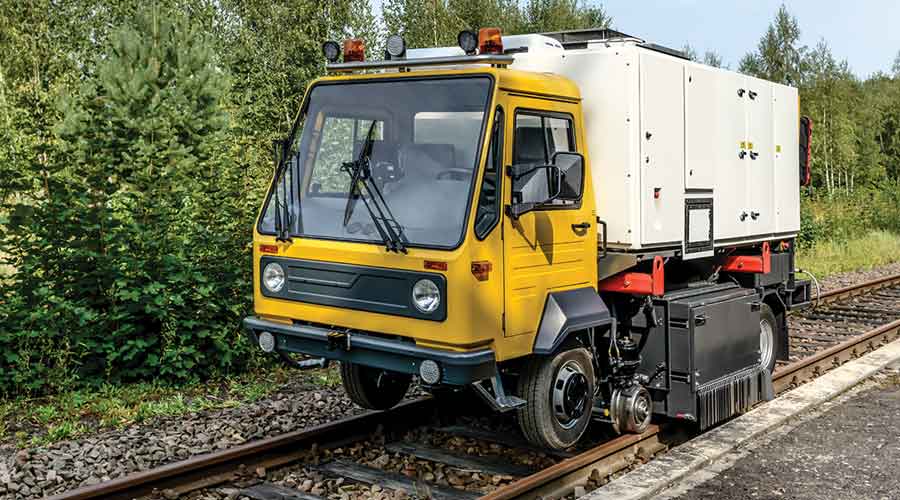 Suited for use on mass transit networks, the Möser Road/Rail Grinding Machine Ro-V 149 has a compact design that enables access into narrow passages. The machine easily can work alongside rail or road traffic, Harsco Rail officials said in an email. Offering high performance and low operational costs, the mobile grinder fulfills all requirements for rail grinding in metropolitan areas and is suitable for re-profiling, removing corrugation and mill scaling, officials said.

Meanwhile, Harsco Rail’s RGHC Transit Grinder series is designed to create the optimal wheel-rail contact while prolonging the track’s lifespan. The machine can grind switches, guarded curves and grade crossings, and is available in various gauges (including an adjustable version).

Built as a 10-, 20-, 30- or 40-stone machine, the Transit Grinder is equipped with independent, hydraulically powered grinding units fitted with abrasive wheels. The hydraulic motor powers the units at 6,000 rpm, and the inclination angle for each grinding unit is determined by the operator from a preset pattern control. A patented linkage arrangement rotates the grinding unit across the rail. 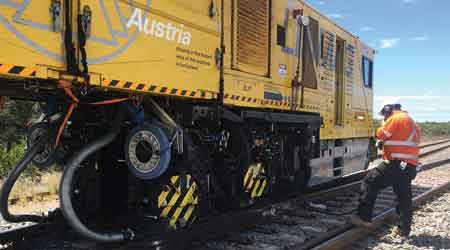 LINSINGER is continuously developing and optimizing the rail milling process with milling trains that can remove as little as 0.1 mm and up to as much as 10 mm in one pass, company officials said in an email.

Rails that would have been condemned can be efficiently regenerated, eliminating costly premature rail exchanges, officials said. The company’s milling machines also can treat switches and crossings, eliminating the need for additional specialized machinery.

The only byproducts of the spark- and dust-free process are milling chips that are collected for recycling, officials said. During the bushfire season in parts of Australia in late 2019, rail milling was allowed to continue operating while grinding operations were stopped, LINSINGER officials said.

In early 2019, LINSINGER rail milling technology was used for the first time in North America (in Toronto) by Rhomberg Sersa North America. 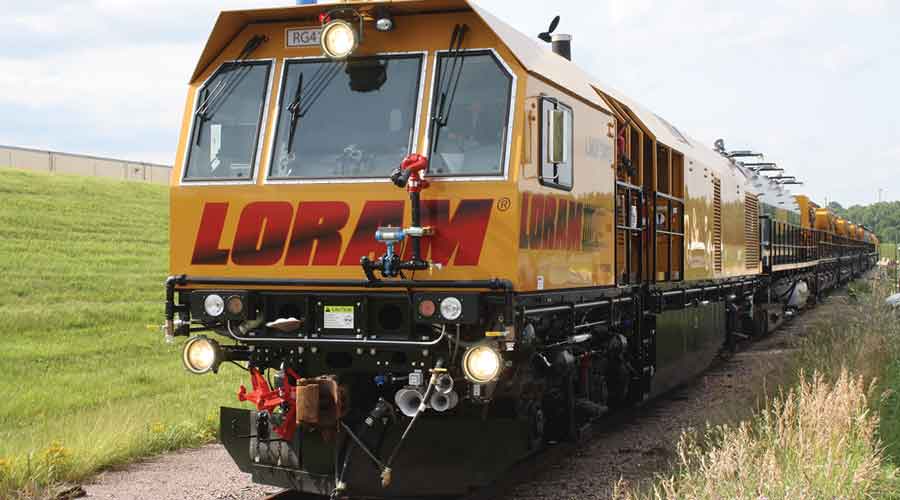 After more than a year of field testing on Class Is, Rail Pro Infinity showed a 10 percent reduction in metal removal, a 6 percent increase in grind speeds, a 15 percent increase in daily pass miles and a 9 percent post-grind Grind Quality Index increase, company officials said. 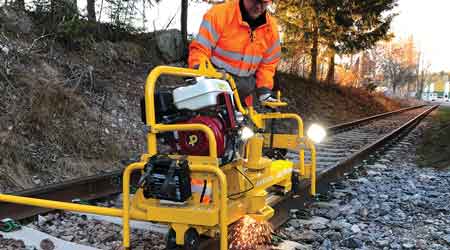 The Alpha Grinder extends track life by grinding the complete profile in one operation.
Pandrol

Pandrol offers the Alpha Grinder, which extends track life by grinding the complete profile in one operation, company officials said in an email. The machine supports all standards of railheads and profiles while using standard grinding stones. Ergonomically built, the unit enables easy raising and lowering of the carrying handles, and includes an electric motor for auto-setting the height of the grindstone, officials said. The unit also incorporates essential and smart safety features.

Pandrol’s Head-Wash Grinder is a hydraulic-powered, track-mounted machine designed to efficiently grind the ball of the rail in preparation for head-wash repair welding. It provides a precision grind to complement the welding process in defect removal. The compact and lightweight grinder allows for quick set-up and breakdown on track, while the ergonomic profile ensures the operator can quickly and comfortably grind the ball to the appropriate depth and width, officials said.

RailWorks Corp. provides turnkey switch and crossing rail grinding services. The grinding business within RailWorks’ Maintenance-of-Way division “has seen a steady uptick in business and activity in 2020, despite the ongoing COVID-19 pandemic,” company officials said in an email. Crews have been working consistently since the pandemic hit, with added safety protocols in place to allow for sanitization and cleaning, social distancing for crews and enhanced screening protocols when the team comes onto a job site.

“RailWorks takes its responsibility to the health and safety of our employees and our customers very seriously,” said RT Swindall, vice president of the MOW division.

Earlier this year, RailWorks expanded its portfolio services portfolio to include a turnkey solution for customers — from inspection to rail analysis to project planning and execution to post-grinding evaluation. The company now has the ability to effectively problem-solve issues in the field, including field restoration of one of the company’s grinding machines, Swindall said. 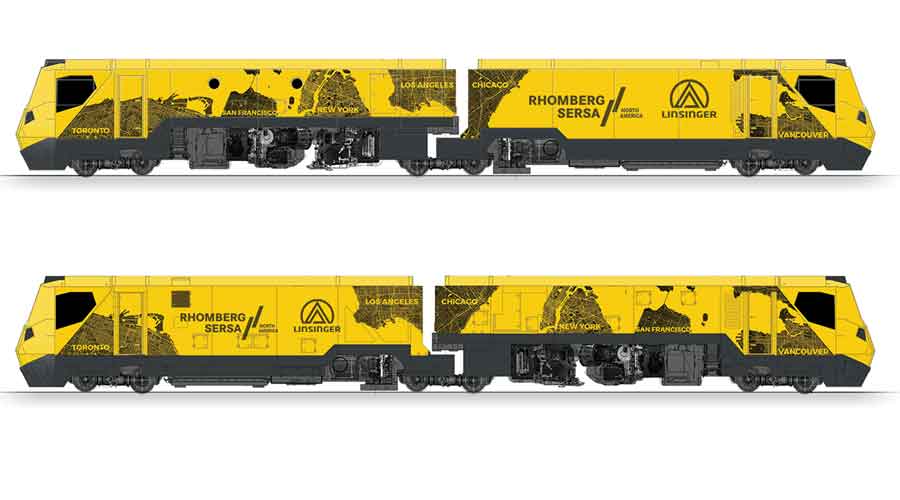 By year’s end, the company plans to introduce a new rail-bound SF02T-FS milling train from the LINSINGER line-up of rail milling machines. The new rail-bound machine has been designed “with clearance profiles of most North American transit systems in mind,” company officials said. With its extended chip storage capacity, the machine can work continuously for up to six hours. The diesel-electric driven milling units (one per rail) can remove as little as 0.1 mm and as much as 1.5 mm of metal on top of the rail in one pass, officials said. The units also feature measurement technology that provides electronic documentation of rail profiles, metal removal and surface crack conditions. The SF02T-FS should be available for contract work in North America by mid-2021, officials said.

The Vossloh Track Milling-compact (VTM-compact) machine, which is already available in North America, can remove up to 2 mm per pass, and a worn rail can be restored in one or two passes, “enabling the operator to extend the rail service life rather than sending the rail to the scrap yard,” said Vossloh North America Executive Vice President Brett Urquhart. “We decided in an early stage to come up with a small flexible solution which can also be transported by road. This technology is a logical complement for hot spot areas of the network where grinding trains would face multiple passes or have other restrictions such as fire dangers.”

Because milling is a cutting technology free from sparks and dust, other potential applications include in curves, tunnels and elevated tracks, or on wooden deck bridges.’

“Our solution is compact, extremely mobile and powerful enough to go anywhere and complete the job at hand in an efficient manner,” Urquhart said.