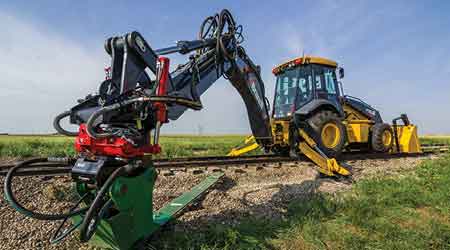 With rail traffic numbers reported down for the first half of 2016 (according to the Association of American Railroads), it should come as no surprise that many railroads' budgets for purchasing things like new rolling stock, equipment and maintenance-of-way related products and services are smaller in 2016 than in prior years.

So when railroads do spend money on things such as material handling equipment, they want to stretch their dollars on machines and services that help their crews get the job done in the safest and most efficient manner possible, suppliers and service providers say.

Brandt's material handling equipment options include the OTM Tracker tie handler. It’s able to distribute up to 2,000 ties per hour when coupled with the R4 Brandt Power unit. The 50,000 pounds of tractive effort pulls ballast cars and OTM cars to sites for distribution.

Also available is the Brandt RTB130 hi-rail backhoe, which is based on the John Deere 710K chassis. Brandt Sales Manager Shaun Gettis described the RTB130 as the "Swiss army knife of spot maintenance." It is equipped with high-flow hydraulics and 159 horsepower to handle large attachments such as a 9-foot undercutter bar and tampers. The Brandt Rail Tool, based on the John Deere 225D chassis, is the big brother to the RTB130. With Brandt’s heavy-duty rail gear and auxiliary engine — with a total of 359 horsepower — the machine is able to manage the most demanding maintenance jobs, from undercutting with its 15-foot bar, to brush-cutting with its 52-inch cutting head, to ditching with its 32-foot reach.

Overall, the lift capacity has increased significantly from the previous model, especially the jib boom performance, he said. The rotation system offers continuous rotation using a heavy duty, 27-inch rotation bearing and hydraulic motor/gearbox. In addition, the unit’s stabilizer legs are removable above grade for serviceability.

The spring of 2016 has been no different, as several tracks were severely impacted in Texas. El Niño brought heavy rain that severely affected railroad operations in that state. As in the past, GREX has been a go-to solution provider, company officials said.

The GREX DumpTrain®, SlotMachine® and Self Powered Slot® are critical in the relief effort. By using this mix of equipment, customers are able to deliver varying sizes of aggregate for an array of applications.

The DumpTrain is the mainstay of casualty events, enabling customers to quickly restore service to tracks where the roadbed was washed away. With the release of the new DumpTrain for Curves™, the DumpTrain's dependability has been further enhanced through the unit’s ability to unload material in any kind of track alignment. The DumpTrain for Curves prototype has already spent a significant amount of time over the past two years on multiple high-profile construction projects, company officials said. The Slot Machines and Self Powered Slots were extensively used in the placement of rip-rap to help protect assets. GREX is ready to work around the clock to assist customers, company officials said.

The Herzog Automated Tie-down Car (ATC) is designed to optimize the safety and efficiency of rail unloading. The automated clamps can be remotely opened and closed from the rear of the train and, ideally, from the operator’s cab of the Herzog Rail Unloading Machine (RUM), said VP of Marketing Tim Francis.

The ATC can clamp and unclamp a stick of rail in less than 10 seconds, which is a dramatic increase in efficiency and overall productivity above that of the manual tie-down cars of old, he said. Furthermore, the automated clamps offer more than double the holding capability of a standard manual tie-down car. This benefit increases safety significantly, he said. Tie-down crews are no longer required to climb around the manual tie-down car during times of inclement weather or on hot summer days to clamp and unclamp the individual pockets on a manual car. A remote control is all they will need to open and close the rail clamps.

"Safety" and "increased efficiency" are words Herzog officials regularly discuss when meeting with railroad partners, said Francis. The Automated Tie-down Car is yet another tool that can help the railroads meet their goals of reducing injuries and increasing efficiencies — both of which can have a dramatic impact on the bottom line, he said.

Throughout North America, L.B. Foster Co. delivers continuous-welded rail (CWR) using its own fleet of trains. As railroads are outsourcing the function of offloading rail, the company has enhanced its service offerings, as well as its equipment.

For example, L.B. Foster continues to promote its project management capabilities. Using new techniques, the company has reduced the time it takes to unload CWR trains on site from three or four days to only two days when unloading out of face, company officials said.

Upon request, L.B. Foster will provide an unloader operator to oversee rail unloading. Using Curve Patch Unloading, L.B. Foster experts will go to various locations along the track, unload the predetermined amount and length of rail, and then tie everything down. Any needed repairs to equipment are made after every delivery.

L.B. Foster also has advanced the equipment for unloading CWR by using two-car multiple threader box unloaders. These unloaders are more efficient and precise, company officials said. They have vertical and horizontal control of the rail, which makes them more effective in placing the CWR exactly where the customer requests.

L.B. Foster has taken steps to enhance the safety of the crews unloading CWR. For example, on Pan-cars, safety stops have been added in the slide channels of the vertical control rollers. Safety railing also has been installed on all the train walkways.

Traditional rail handling equipment utilizes aged technology and struggles to meet current demands, according to executives at Loram Maintenance of Way Inc. As railroads look to renew their fleets, they seek to address concerns of antiquated equipment and gain production efficiencies, as well as improve employee safety.

Loram’s Raptor is designed to do just that by outperforming traditional rail-handling systems with double the production at 3,000 feet per hour, Loram officials said. The Raptor provides a better solution for the entire process of rail relay as opposed to a system focused solely on rail delivery, company officials believe. The unit also diminishes risk of injury by reducing the human interaction and retaining total control of the rail while loading and unloading, they said.

The lifecycle of rail includes four primary logistical components: transport of rail from steel mill or ship to welding plant, delivery of CWR from plant to trackside, pickup of relay rail for reuse or re-welding, and pickup and disposition of scrap rail. The Raptor's modular design can easily adapt to a family of machines that provide service in any of those four areas.

The latest addition to NMC Railway Systems’ product line is the updated NMC CTC08E Tie Crane, which is designed specifically for railroad tie placing and material handling projects. The crane’s compact design allows for increased lift capacity with "exceptional" swing speed, said NMC officials. Also, its precise tool control enhances tie handling agility. As a Tier 4 final unit, it doesn’t require diesel exhaust fluid. Regeneration is transparent to the operator and does not require stopping for regeneration, they said. The unit burns less than 2 gallons of fuel per hour.

NMC has sensed an increasing need for a more compact piece of material handling equipment that still can move up and down the track lines, company officials said. As a result, the CTC08E Tie Crane is designed to enable operators to handle concrete and wood ties more efficiently. The tie crane’s on-track drive solution also allows for greater visibility, which enhances tie placement and accuracy. In summary, the tie crane was engineered to make it easier for operators to use, they said.

Omaha Track Equipment engineers and "upfits" material handling trucks, commonly referred to as grapple trucks. This truck configuration — which is widely used by railroads and contractors — is equipped to load and unload rail, ties and OTM. Omaha trucks typically are furnished with a grapple, magnet system and creep drive system, allowing the operator to drive the truck on rail from the upper crane operator seat.

Omaha Track manufactures heavy duty material carts equipped with rail gear for hauling rail and ties on track. Other optional features available for those trucks are clam bucket attachments, hydraulic tool circuits, and knuckle with train air for moving rail cars. Grapple trucks are "upfitted" at Omaha Track Equipment on a customer-provided cab/chassis, or the company can supply the cab/chassis of the customer's preferred manufacturer, Omaha Track officials said.

MFS cars are available in various sizes, from the MFS15 to the MFS120, to meet the customers’ needs and requirements of loading and clearance restrictions. Material storage capacity may be increased by coupling multiple units together.

The floor of the MFS consists of a wide, hydraulically variable speed driven conveyor belt. The unit’s front carries a rotatable, hydraulically driven conveyor for unloading the MFS or transferring material to another MFS, a ballast-distributing machine or other hopper cars, into highway trucks or onto the railway right of way. Each MFS car is individually powered with its own engine, hydraulic supply and electrical system.

MFS cars also can be used to load Plasser ballast distributing equipment. The use of multiple units along with any Plasser ballast undercutter/cleaner helps to provide efficient spoil removal without interruption of the ballast cleaning process, Plasser officials said. The MFS can be used in conjunction with a Plasser BDS100/200 ballast distribution system, ULS3000 ballast unloading station and BLS2000 ballast loading system.

With a lifting height of 39.5 inches, the vehicle undercarriage is accessible for inspection and maintenance. The hydraulic power unit is driven by a 20 horsepower gasoline engine with electric start. With no reliance on facility power, the entire lift system is designed so that it can be disassembled and deployed for field maintenance operations. All that is required is a concrete support pad, Railquip officials said.