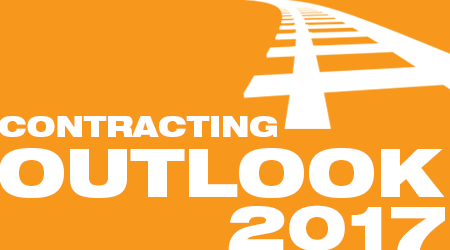 Last year at this time, railroad contractors were gearing up for a challenging 2016. Concerns about a lumbering economy, flagging freight-rail traffic and falling Class I capex figures worried some while the hope for increases in short-line and transit-rail business buoyed others.

A year later, the concerns and hopes remain pretty much the same, with a new form of fuzziness — how rail rates, priority wise, for the Trump administration. But here in late 2016, there may be a bit more of an upside in the "hope" column of the ledger, if for no other reason than the contracting crowd has gotten used to navigating murky waters. It's part of the planning deal. And in the rail realm, so is infrastructure upkeep.

On the freight-rail side, 2017 "looks OK, but certainly not markedly better," Chuck Baker, president of the National Railroad Construction & Maintenance Association (NRC), told attendees of RailTrends 2016, which was held Nov. 17-18 in New York City. (For a RailTrends recap, click here.)

Based in part on feedback from NRC member contractors and suppliers, Baker expects the sluggish economy to remain sluggish for the near term. Meanwhile, persistent rumblings about even lower capex numbers in Class I country only serve to curb planners' enthusiasm about 2017’s prospects.

"No railroad has announced publicly, but reading between the lines, you could hope for flat spending, at best — and I’d expect [Class I spending] will be down," Baker says. "They're making less money, less profit, generally, so it's not magic. When business is down, fewer projects meet your internal ROI hurdle."

Regardless, freight railroads will set aside a good chunk of change for contract work, just as they did this past year and as they have for a while now.

"They don't make 50-year decisions based on 12 months of data," says Baker, who expects 2017 Class I capex totals "will still be quite high, in the scheme of things."

Meanwhile, contractors that have a diverse customer base or provide unique technology or services tend to do better when railroad spending is down or flat.

"That's a tremendous kind of protection against headwinds," Baker says.

The outlook for transit-rail business appears to be a bit brighter (see page 31), particularly in communities that approved passenger-rail initiatives on Nov. 8. On Election Day, voters approved 33 of 48 local and statewide public transit measures — including a $120 billion transit plan in Los Angeles County — according to the American Public Transportation Association.

Baker isn't expecting "significant grant dollars" or a massive cash infusion from the Trump administration or Republican-controlled Congress ("Republicans historically have been far less interested in funding rail transit and intercity passenger rail"), but there could be "big opportunities” for contractors via the Transportation Infrastructure Financing and Innovation Act and other initiatives, he believes.

"It's increasingly important for transit agencies to be more cost-efficient," Baker adds. "NRC members have a big opportunity to help there — from providing track signal infrastructure maintenance to rehab work. There seems to be a huge amount of anecdotal evidence and stories that, when contractors are involved, they can do this work more efficiently than large, in-house MOW forces in the public sector that have been shielded from competition. I think it's fair to believe we’ll have an ally in the new administration."

What were contractors thinking about as they prepared to turn the page on 2016?

Before the election, we queried a sampling of them about the year ahead. Specifically, we asked: What does 2017 look like? Better? Similar? Worse? Why? What's your 2017 forecast for the railroad contracting segment or your business? And: How is your organization gearing up to prepare? Emailed responses from five high–ranking execs at contracting firms appear below.