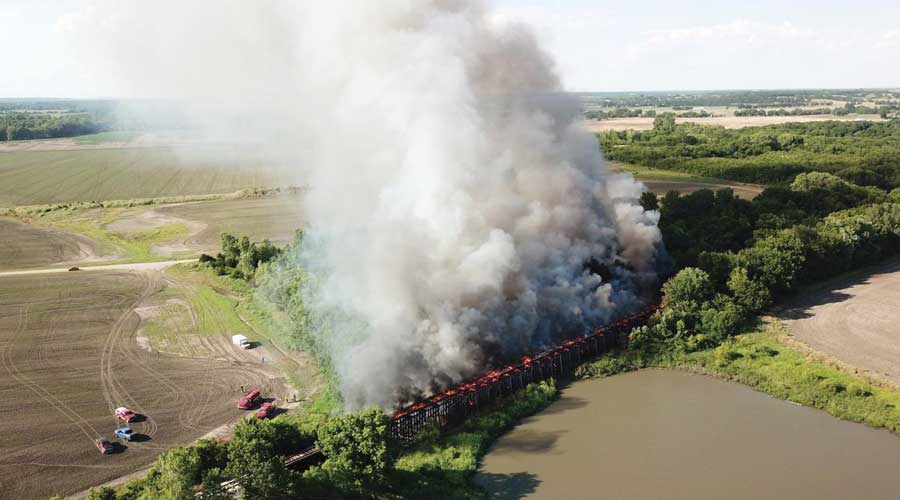 Stretching over waterways, roads and greenspaces, rail bridges are critical links in railroads’ systems. Many of the structures across the country have reached or exceeded their lifespans — with some in place for a century or more — so they require major upgrades or replacement.

Following are a few rail bridge projects that captured the attention of one Class I, two short lines and two commuter railroads last year. The projects either entered the planning stages, advanced to construction or were completed in 2020.

When a wooden trestle on Watco Cos. LLC’s South Kansas & Oklahoma Railroad (SKOL) in southeast Kansas caught fire last year, the railroad’s crew teamed up with contractors and local safety crews to salvage critical parts of the rail bridge and reconstruct it in 16 days.

Located one-half mile east of Independence, Kansas, the bridge is on a vital line connecting SKOL to Tulsa and the Port of Catoosa in Oklahoma. The short line uses the track to move hazardous materials, grain, rock, sand and steel.

The June 24 fire spread quickly over the 505-foot-long wooden structure and engulfed it in about 12 minutes. The fire’s cause has not been determined, and due to the bridge damage, there was no way to test for accelerants that might have started it, SKOL officials said in an email.

Four fire departments responded to the fire, and Watco customer CVR Energy from nearby Coffeyville, Kansas, sprayed about 200 gallons of fire suppressant on the structure.

Because the fire was so intense, firefighters decided to let it burn out.

Contracted crews led by the SKOL managers focused on directing water onto the piles for about 16 hours. In the meantime, two contractors with track hoes removed the deck to keep the fire from spreading.

Because of those and other measures, repair work started two days later.

Koppers Railroad Structures and Brinks Engineering Solutions were the lead bridge contractors, and Elnicki Inc. and B&L Trenching provided support. The bridge was rebuilt as a framed timber trestle, matching the previous structure.

“The only difference is the new bridge was framed off the old pile bases that we were able to save,” Watco Bridge Manager Mike McDermott said in an email. “Existing burned piles were cut off at ground line or below where sound material was present.”

Crews also installed new 115-pound rail across the bridge. The first train rolled eastbound across the new structure on July 13.

During reconstruction, the railroad rerouted cars through Columbus, Kansas, and extra trains were run during the week to meet customers’ needs. BNSF Railway Co. and the Stillwater Central Railroad (SLWC) helped prevent delays, Waun said in an email.

The Virginia Department of Rail and Public Transportation (DRPT) is working to improve rail capacity and service through the 1.8-mile Long Bridge Corridor between the Rosslyn Interlocking in Arlington, Virginia, and L’Enfant Interlocking in Washington, D.C. 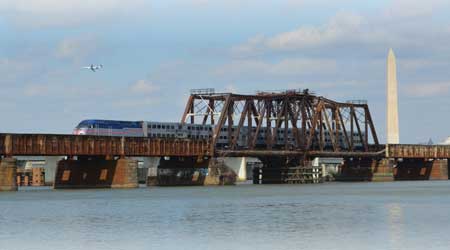 The Virginia Department of Rail and Public Transportation is in the early planning stages of a project to construct a second two-track bridge on the Long Bridge Corridor between Arlington, Virginia, and Washington, D.C.
District Department of Transportation

To improve passenger- and freight-rail service, DRPT and its partners — the District Department of Transportation and the Federal Railroad Administration — are in the early planning stages of a project aimed at constructing a second two-track bridge on the corridor upstream of the existing Long Bridge.

With two bridges in place, the corridor would offer a four-track crossing over the Potomac River, enabling passenger and freight trains to operate on separate bridges.

The existing two-track rail bridge — which is owned by CSX — is used by the Class I, Amtrak and Virginia Railway Express (VRE). Long Bridge is one of CSX’s most significant passenger- and freight-rail choke points along the entire east coast, CSX officials said in an email.

“[It’s] currently at 98% capacity during normal weekday rush hours, preventing the ability for the District, Virginia and Maryland to increase passenger- and commuter-rail options for its communities,” said CSX spokesperson Sheriee Bowman.

The move also would reduce congestion and improve fluidity for CSX, and benefit the Port of Virginia since much of the Class I’s traffic from the port travels over the Long Bridge.

Project plans call for crews to construct a shared-use path for bicycle and pedestrian traffic spanning the George Washington Memorial Parkway and the Potomac River.

Similar to the Long Bridge project, DRPT plans to separate freight- and passenger-rail traffic in CSX’s Richmond, Fredericksburg and Potomac corridor. That $37 million project calls for replacing the two-track Newington Road bridge in Lorton, Virginia, and building a new two-track bridge built adjacent to it for CSX trains to use.

The project will be funded in part by a $14.4 million grant from the U.S. Department of Transportation’s State of Good Repair program.

“Ultimately, the project will address a state-of-good-repair need for the railroad, as well as improve the rail and roadway network with modern clearances, lower maintenance costs and increased capacity built for growth,” Bowman said.

Bridge design work is slated to start this year, with construction starting in 2023 and finishing in 2025.

NJ Transit: Out with the old

A 112-year-old swing span bridge, which was damaged during Hurricane Sandy in 2012, is finally receiving long-need funding and attention.

In September 2020, New Jersey Transit broke ground on a $595 million project to replace the River Draw Bridge. The aging bridge, which carries NJ Transit’s North Jersey Coast Line (NJCL) commuter trains over the Raritan River between Perth Amboy and South Amboy, will be replaced by a new bridge with a resilient structural design.

The Raritan River Bridge is the sole rail link for 17 of the 20 stations on the NJCL to the major job centers of Newark, Jersey City, and Manhattan. It accommodates almost 10,000 NJ Transit riders each day and handles about two million tons of freight moved by Contrail annually.

The new drawbridge is being constructed with materials designed to withstand future storm surges and be significantly less vulnerable to severe weather events.

The western alignment will place the new bridge farther from the ocean to improve flood resilience and increase train speeds over the structure. New mechanical and electrical systems will provide more reliable span operations, resulting in reduced maintenance costs. In addition, improved navigation at the lift span is expected to reduce the risk of vessel collisions with the bridge’s pier protection systems.

NJ Transit anticipates rail service to be shifted to the new bridge by 2025, agency officials said in an email.

In October 2020, Caltrain began a 14-month project involving major work on the Napoleon Street Bridge and improvements to the Marin Street Bridge in San Francisco. The bridges are located near the base of Islais Creek under Interstate 280.

The Napoleon Street Bridge will be replaced for safety and structural integrity purposes, according to Caltrain. The railroad’s crews will replace four short bridge spans with a center steel bridge. The new structure also will feature steel girders and new wing walls.

The Napoleon Street Bridge is aging and recently suffered fire damage, according to a project presentation. Construction is slated for completion in summer 2021.

Caltrain crews began minor safety improvements to the Marin Street Bridge to maintain it in a state of good repair. Work will be completed in spring.

The project also may include additional trackwork from Cesar Chavez to Jerrold Street, which would begin in the summer and conclude in fall.

The new $9.8 million bridge can accommodate a future second track for additional freight service as well as future passenger- or commuter-rail services.

The project also included the extension of a pedestrian greenway under the bridge to connect Morrisville and Cary.

NCRR partnered with the town of Morrisville to construct the bridge over Crabtree Creek, which replaced a structure built in 1927.

NCRR provided $8.7 million for the project, with the town covering the remainder.

“The construction of a new bridge that accommodates the future growth of freight and passenger service … is a win-win for all involved,” said NCRR President and Chief Executive Officer Carl Warren in a press release.