Railroads rely on traditional and inventive ways to (re)build bridges

Each year, rail bridges demand attention to a range of maintenance issues — from routine tie replacement to complete structural replacement — to keep the aging structures safe and efficient.

Whether for routine maintenance, unplanned repairs or new construction plans, freight and passenger railroads alike invest tens of millions of dollars annually into the bridges that are critical to their systems, as detailed in Progressive Railroading’s 2019 MOW Spending Reports.

The following are a few recent bridge projects that have been in the works, have advanced to construction or were completed in 2019 by a transit agency, two Class Is and a commuter railroad.

Sound Transit: One of a kind

Sound Transit is deep in the process of extending its Link light-rail line over the Homer M. Hadley Memorial Bridge in Seattle, marking the first time light-rail track will be constructed on a floating bridge. A floating, or pontoon, bridge is one that is constructed using floats instead of anchored piers to support the bridge deck over a body of water.

The bridge project is part of the 14-mile East Link light-rail extension that will connect Seattle’s International District to Judkins Park across Interstate 90 over Lake Washington by 2023. 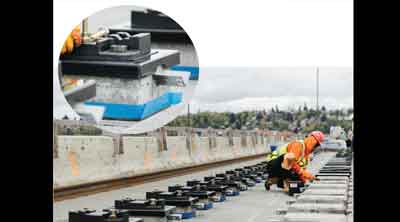 Typically, light-rail track is supported on a bridge by rebar within the structure. However, in this case, crews needed to avoid drilling holes into the bridge. Creating holes in the structure could compromise the bridge’s lifespan and the rebar would add weight.

The blocks were then attached to the bridge on top of corkelast, a shock-absorbing, spongy material designed to isolate stray electrical current coming from light-rail trains. Next, track was set on the blocks with steel tie bars placed between them to maintain gauge, similar to a standard railroad tie system, as Sound Transit officials described in a press release.

Crews also installed overhead catenary system portals and completed post-tensioning of the bridge pontoons to reinforce the concrete with high-strength tensioned strains so the structure can support the weight of light-rail trains and passenger vehicles.

The project also required the construction of specially engineered segments, called track bridges, that compensate for vertical and lateral lake motion over the bridge’s joints. Track bridges are especially important to install at the locations where light-rail trains travel from fixed track to the floating bridge. To date, crews have installed all eight track bridges.

“One of the most difficult tasks was to adapt the rails to the movement of the bridge,” Cunningham says.

Since it’s a first-of-its-kind project, Sound Transit conducted extensive testing of computerized models and physical prototypes of the bridge and its components at the Transportation Technology Center Inc. in Pueblo, Colorado. The agency’s design passed all critical test criteria to be able to provide rail operations at planned speeds up to 55 mph, which is the highest speed that Link operates.

The floating bridge originally was built in 1989 with the intention of accommodating high-capacity transit needs in the future, Sound Transit officials say. Now, 30 years later, that plan is being realized as the once high-occupancy vehicle lane on I-90 transforms into a light-rail right of way.

Norfolk Southern: Not a total washout

In October 2019, Norfolk Southern Railway completed restoration of the Grand River Bridge in Brunswick, Missouri, nearly a month after 270 feet of the 1,152-foot structure was washed away by heavy rains, flooding and an unusual amount of drift material built up against the structure.

The bridge lost four deck-plate girder spans and three piers. As a result, NS had to redesign the bridge from scratch to fill the gap and restore rail service between Moberly and Kansas City. 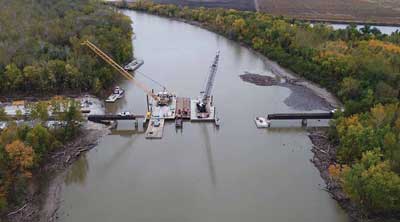 When the bridge washout occurred Oct. 1, the Class I called on Marine Solutions Inc. to scan the river to determine what portions of the structure remained; Hanson Professional Services Inc. to assist in the design of the new bridge; and Massman Construction Co. to lead the reconstruction work.

The construction team mobilized barges and cranes out of St. Louis and arrived on site Oct. 7, moving all the equipment up the Missouri and Grand rivers during flood conditions, Ed Boyle, NS’s vice president of engineering, said in an email.

By the time Massman Construction crews positioned their equipment, NS had surveyed the river bottom and determined the layout for the new substructure.

The design called for installation of one 12-pile bent and two drilled shaft piers. The spans were anchored 15 feet or more into the river’s rock bottom, marking the biggest difference in the design from the original bridge in which the spans were supported by concrete piers resting on rock.

Four steel spans that NS stores for emergencies were shipped in for the new superstructure.

“There were challenges almost daily when working around the clock to reconstruct this portion of the bridge. These challenges went from getting material to actual construction issues,” Boyle said. “The key was we worked as a partnership amongst all those involved to persevere and handle these challenges.”

To restore service on the heavily traveled route as quickly as possible, crews had to adjust the reconstruction plan, he said. For example, in a typical construction project, one template for aligning the drilled shafts for the pier would be built. Then, after one pier is completed, crews would remove the template and move it on to the next pier.

Under that manner of construction, it would take two weeks to build the piers. To save time, crews instead built two templates to construct the piers simultaneously.

“We had a problem setting up the casing for the first drilled shaft when we hit some old timber piling in the way of the casing,” Boyle recalled. “Where this would have slowed a typical project down while the timber pile was removed, we simply jumped over to the other template for the other pier and did not miss a beat in setting the casings.”

“The [NS] engineering team always seems to excel when these natural disasters occur, but their work at the Grand River exceeded my wildest expectations,” Boyle said of the project.

For the past several years, BNSF Railway Co. has proposed building two bridges across Lake Pend Oreille and Sand Creek at Sandpoint in Bonner County, Idaho, to reduce congestion on the Class I’s single-track mainline in the area.

The bridges would be part of a second line in northern Idaho where BNSF’s mainline has become an operational constraint. Currently, the single track requires trains to wait for clearance to cross the existing bridge, which creates congestion on the mainline, yard and siding tracks, according to a Federal Register notice regarding the bridge proposal’s environmental assessment.

Currently, the line’s daily capacity through Sandpoint and across Lake Pend Oreille is about 79 trains, and average daily traffic on the line segment is about 60 trains. The additional bridges would not increase or decrease rail traffic, but would increase the efficiency of rail traffic already moving through the area by allowing trains to cross the bridge more quickly, BNSF officials believe according to the notice.

In September 2019, the U.S. Coast Guard reviewed the final environmental assessment for the project and found it met federal requirements, wouldn’t have a significant impact on the environment and wouldn’t obstruct navigation. Since the BNSF bridges would cross U.S. navigable waters, the Coast Guard was required to approve the plans.

However, the project has faced opposition from local environmental groups seeking a higher level of environmental review, and from Sandpoint Mayor Shelby Rognstaf, who raised concerns about the potential for increased rail traffic and possible derailments.

In response, BNSF added Federal Railroad Administration accident statistics and additional details to its plan to better characterize derailment risks and provide more information on the railroad’s spill response planning for different types of spills under various weather conditions. The railroad also included in its proposal the Lake Pend Oreille Geographic Response Plan, which will be implemented in the event of a rail accident. Finally, BNSF maintained that traffic wouldn’t increase on its line due to the construction of the bridges.

“The market conditions influencing train traffic growth in the study area exist with or without construction of a second mainline track and associated bridges,” according to the notice.

Previously proposed alternatives to the project included adding a second mainline east of the existing mainline, creating alternate routes or shifting traffic to other railroads. But each was dismissed based on infeasibility or impracticability, BNSF officials said in the notice.

LIRR: Out with the old

Between 2010 and 2019, the bridge was struck by motor vehicles 43 times, with 16 of those collisions occurring between 2018 and 2019. Due to its low clearance, the bridge was the third most-often hit structure in the railroad’s system, LIRR officials said in a press release. 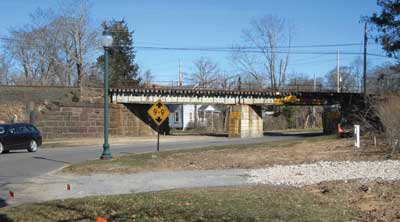 The original bridge — which dated back to 1911 — was 11 feet, 6-inches above the roadway, well below modern design standards. The bridge now stands two-and-a-half-feet higher.

In addition, the new structure includes room for a future third track, which will be added in 2022. The track will expand capacity, allow reverse commuting and increase flexibility so the railroad can work around and more quickly recover from service disruptions, LIRR officials said.

The bridge replacement was part of the LIRR Expansion Project, which aims to upgrade major bridges and grade crossings along the railroad’s mainline.

Email questions and comments to vesna.brajkovic@tradepress.com.