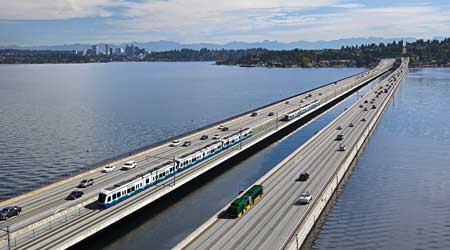 It's never a simple task to replace century-old rail bridges, but building a brand-new one poses a slew of challenges, too. Witness Sound Transit's recent efforts to construct a light-rail line on a "floating" vehicular bridge.

Due to shifting lake levels and weather conditions, the tracks on the bridge were engineered to accommodate six different ranges of motion as they cross from a fixed bridge to the floating section on Interstate 90.

"It's a marine vessel, for all intents and purposes," says John Sleavin, the project's senior technical director. "It really made us go back to the principles of engineering."

Construction on the project began over the summer and will continue through 2020. Now, Sound Transit is performing post-tensioning work on the floating bridge, Sleavin says. The agency plans to begin installing track in 2019, with the entire East Link extension slated to open in 2023.

"While we didn't have a lake there, we used ballast to jack the track into different positions to simulate a lake level that was higher or lower," Sleavin says.