The sounds one hears any day around the Ottawa Lift Bridge in Illinois have not changed for more than a century: the Illinois River rushing underneath, passing barges blaring their horns, the rhythmic "clunk clunk" of freight trains slowly crossing the iron railroad bridge. But recently that timeless medley was interrupted by a new sound: the methodical hum of unmanned aerial vehicles (UAVs), or drones, flying in precise patterns around the classic structure. The 19th century railroad bridge was getting a 21st century inspection. 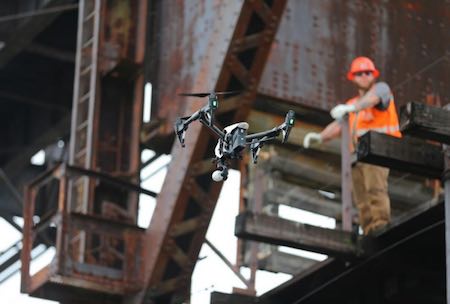 In 1898, the Chicago, Burlington & Quincy Railroad built a flat railroad bridge across the Illinois River at Ottawa in northern Illinois. As barge traffic on the river got larger and taller, the center span of the bridge was refitted as a vertical "lift" section in 1932. The bridge has changed hands over the years, and stayed busy into the 21st century, but long-haul rail traffic eventually migrated to newer, faster routes. Yet, the bridge has remained economically relevant as part of a short-line connection.

In May, the current owner of the structure decided to leverage state-of-the-art inspection techniques to gather the data needed to support extending the bridge’s service life. With its railroad infrastructure partner, it commissioned Unmanned Experts Inc. (UMEX) to conduct a UAV inspection of the venerable railroad bridge.

For the Ottawa Lift Bridge inspection project, the team of Dave Prall, vice president of special projects and pilot-in-command, and JD Prall, project manager and visual observer, brought a fleet of UAVs: an Aeryon SkyRanger, an AsTec Falcon 8 and a DJI Inspire. For two days they operated the drones from the shore and from a pontoon boat, flying programmed patterns to capture the ultra-high-resolution images. These are used to produce both two- and three-dimensional renderings of the bridge as viewed from the sides, top and bottom.

The team leveraged the complementary attributes of the aircrafts. The Falcon 8, with a "look up" photo capability, was essential for inspecting the underside of the bridge. The SkyRanger allowed both precise close-up shots and wide panorama shots in the same flights. And the Inspire provided an economical backup that could be quickly deployed for follow-up views. 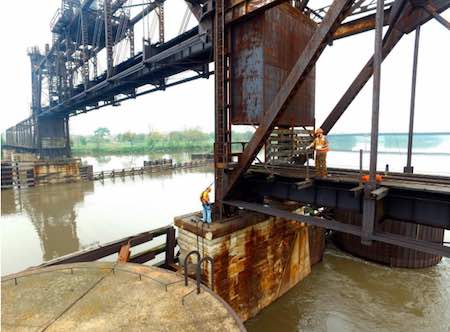 Panorama of the Ottawa Lift Bridge from the SkyRanger UAV.
Photo: Unmanned Experts

"Flying a precise pattern around a bridge structure is deceptively challenging," says Prall. "Wind currents change constantly. The bridge's metal structure can disrupt a drone's compass, degrading directional orientation. And flying underneath a bridge blocks the GPS signals used for stability and positioning, forcing pilots to use a 'manual' drone flight mode."

The UMEX team is one of only a handful of groups in the industry with the experience, equipment and skills to safely and effectively conduct UAV-based inspections in such challenging situations.

While the flying requires intense concentration, Prall notes that the payoff is significant: Each flight generates huge amounts of useful data. The bridge owners and their inspection partner are now using the inspection images to evaluate the integrity of trusses and joints and determine what, if any, maintenance or repairs are needed to extend the century-old bridge’s utility.

Contributed by Bill Cossoff of Unmanned Experts Inc., in North Denver, Colo. UMEX crews are OSHA-10 trained and NERC-screened, and the company has undergone ISNetWorld Certification. UMEX is presently in the final stages of receiving the highest level of SGS Remotely Piloted Aircraft Systems (RPAS) Safety & Compliance Verification, the most comprehensive audit of safety systems and operational safety practices within the drone industry. For more information, visit www.unmannedexperts.com.