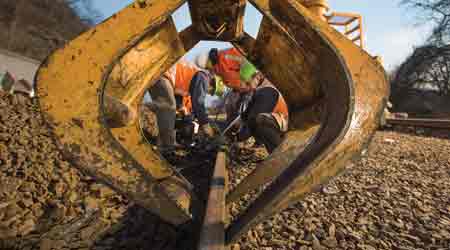 The overriding theme of our annual maintenance-of-way (MOW) spending report for many of the 14 years we’ve compiled it has been a preponderance of bigger budgets among freight and passenger railroads. But not for this 15th iteration.

Our 2016 MOW survey — which elicited 72 responses (in the print edition) from more than 200 freight- and passenger-rail constituents that were approached — shows only two of seven Class Is are allocating more dollars than they did in 2015. In addition, 15 of 34 regional or short-line respondents and nine of 23 passenger-rail respondents that shared 2015 and 2016 dollar figures have trimmed their budgets.

Yet, even though such a large number of respondents have reduced MOW spending this year — the most since our 2005 report — many of the tighter budgets haven’t been tightened all that much. Moreover, some of the budget hikes are significant, such as an 11 percent climb in Amtrak’s planned spending to $980 million. And despite shorter work lists on many railroad’s dockets, there still are a lot of projects planned.

Class Is have quite a few slated in their MOW programs, the budget trims notwithstanding. Most large roads cut spending because of traffic declines and a corresponding drop in network wear and tear. For example, BNSF Railway Co. accounted for recent capacity expansions and lower volume levels in this year’s budget.

“Each year, our capital plan works to balance our near-term need to regularly maintain a vast network with the longer-term demand outlook of our customers,” BNSF officials wrote in their survey.

Lighter carloads also were cited as the primary budget-trimming factor by several regional and short-line respondents. Officials at Carload Express Inc., which owns four short lines, put it this way in their survey: “We’re budgeting $3 million less as a precaution to potential business declines related to energy declines.”

“We have a $150 million backlog of rail projects that are not included in our current $80.7 million, five-year rail capital improvement program,” they said.

For others, more resources are vital to carrying out additional MOW work. The Los Angeles County Metropolitan Transportation Authority (Metro) identified both a lack of resources and tight work windows — which continue to impact freight and passenger railroads’ MOW programs — as its top capital program challenges.

No matter the limitations, railroads expect to plow ahead with their MOW programs. The following pages provide a glimpse of what this year’s programs entail.

Editor's note: The online version of the Class I MOW programs includes information from Ferromex, which was submitted too late to appear in the print version.