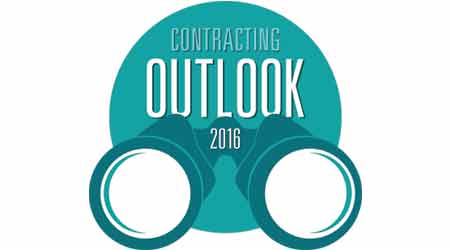 For the past five years, it was a broken record railroad contractors and suppliers loved hearing: increased capital spending budgets for Class Is. What does 2016 sound like? Although freight railroads were several weeks away from revealing their capital spending plans as of press time, contractors and suppliers were bracing for a slight step back from the record $29 billion allocated for capital improvements in 2015.

“It’s not going to be a record — [our] members are definitely starting to see that already,” says Chuck Baker, president of the National Railroad Construction & Maintenance Association (NRC), which represents railroad contractors and suppliers. “A few are saying, ‘This year’s been great, we’ve been really busy.’ But they don’t have the kind of backlog that they’ve had the last couple years.”

Regardless, Baker is bullish on the near-term prospects for the railroad contracting crowd. Whatever the actual dollar figure turns out to be, 2016 freight-rail spending should still be strong, he says.

Add in potential increases in short-line railroad and transit spending, and continued service and product innovation, and it appears that 2016 is shaping up as a year of steady growth for contractors, Baker believes.

To be sure, the past half-dozen years have been extremely good for the railroad contracting and maintenance industry, Baker says. Class Is alone have poured in more than $150 billion in capital spending during that span, providing a big boost to many NRC members that were hobbled after the economic recession of 2008-09.

Railroad Contractors: Back to Business 101

But as railroads grapple with declines in coal and crude-by-rail revenue, and other economic uncertainties, a decline in capital spending seems likely, Baker says. Still, he believes railroads are taking a measured approach to the future.

“I don’t think we’re seeing any kind of dramatic overreaction from the railroads, like the late ‘90s and early 2000s, when they really stepped back and underinvested, and they weren’t ready for the uptick in traffic when it came,” he says. “When we see the railroad numbers for next year, they will still be numbers that are healthy — numbers that, a couple of years ago, we would have said, ‘Wow, that’s huge.’ But compared to ’14 and ’15, they’re going to be smaller, no question.”

For some contractors, “it’s going to cause some stress, but that means it’s time to go back to Business 101,” Baker says. “You try to manage your expenses against revenues.”

For others, going back to basics could mean stepping it up on the business diversification front.

“The contractors and suppliers who do the best job of having diverse business lines seem to weather different kinds of markets well,” Baker says, adding that some NRC members work on Class I, short-line, light-rail, commuter-rail, streetcar, industrial and military facility projects, and “even a few things outside the rail industry.”

Many contractors also have improved their ability to develop specialized products and services that fill needed niches for railroads, he adds.

“I see people working very hard to have a solution that’s theirs and theirs alone, which can really put you in a great position … if you’re the only one,” Baker says.

Diversity and innovation likely will come in handy in 2016, as Baker foresees some increases in the transit-rail environment after years of static spending. The most recent versions of the federal surface transportation bill in Congress point to a possible transit spending increase of 3 percent to 6 percent a year.

“It’s not a game changer, but it’s better than flat,” he says.

And at the local level, voters across the country approved spending on more than 20 transit projects in 2015, many of them rail related. Contractors also are likely to benefit from continued local/regional transit spending via continued Transportation Investment Generating Economic Recovery (TIGER) grants administered by the U.S. Department of Transportation.

In addition to working on transit-related funding bills in Washington, D.C., the NRC also has been busy lobbying for funding and legislation that is poised to pay some dividends in the non-Class I freight-rail sector, Baker says, adding that he is “cautiously optimistic” that the federal tax credit program that has helped regionals and short lines fund infrastructure improvements over the past several years will be renewed soon. The Section 45G provision enables regionals and short lines to claim a tax credit of 50 cents for every dollar invested in track rehabilitation, up to a cap equal to $3,500 times their total track miles. It expired at 2014’s end. As of press time, there were two standalone bills in Congress with wide support to extend the program, although they could fail if lumped in with other, more unpopular budget measures, Baker says.

Meanwhile, the latest surface transportation bill also appears to provide more funding related to freight railroad projects than in past years, which is likely to lead to more federal money available for such projects as grade crossing upgrades, grade separations and trackwork that will benefit small, targeted areas, Baker says.

Despite uncertainties surrounding both rail funding and spending, he believes NRC members are positioned well for continued success.

“There’s definitely a little concern about capital investment levels over the next year or two,” Baker says. “Things are getting a little more stressful, but they’re good companies doing good quality work with loyal customers and a diverse business — they’ll be fine.”