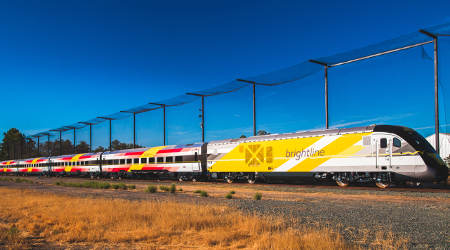 Siemens has completed and shipped its fifth trainset for the future Brightline passenger-rail service in Southeastern Florida.

The unit is the final trainset for Brightline's first phase of passenger-rail service between Miami, Fort Lauderdale and West Palm Beach. After the train arrives at the railroad's operations facility in West Palm Beach, the testing and commissioning process will begin.

"The voyage of BrightRed across the U.S. is an exciting milestone as we gear up to launch service later this year," said Brightline Chief Executive Officer Dave Howard.

Brightline's trains are composed of two diesel-electric locomotives and four stainless-steel coaches. The locomotives will be compliant with the Environmental Protection Agency's Tier IV emissions standards.

Service on Brightline's first phase was slated to launch in August, but it's now expected to open by the year's end, the Miami Herald reported last month.