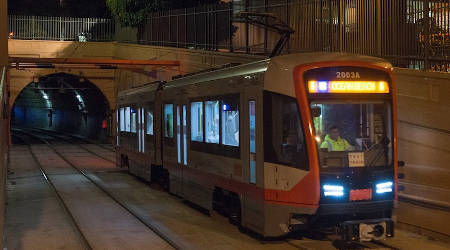 The San Francisco Municipal Transportation Agency (SFMTA) has completed all required testing for five of its next-generation light-rail trains.

The agency will begin rolling out the new units once it receives certification from the California Public Utilities Commission, SFMTA officials said in a press release.

SFMTA tested a new communications and monitoring system, as well as the Muni subway's automatic train control system. In addition, the agency performed various safety tests, including verifying the trains' ability to brake quickly for emergencies.

After the tests, SFMTA made adjustments to hardware, software and tunnel infrastructure.

The first five trains are scheduled to begin service this year, with the remaining fleet arriving in phases as it's manufactured by Siemens in Sacramento, California. By 2021, Muni's 151-car fleet will expand to more than 200.

Last month, SFMTA began closing the subway on weeknights and weekends to allow engineers uninterrupted time to conduct the tests.