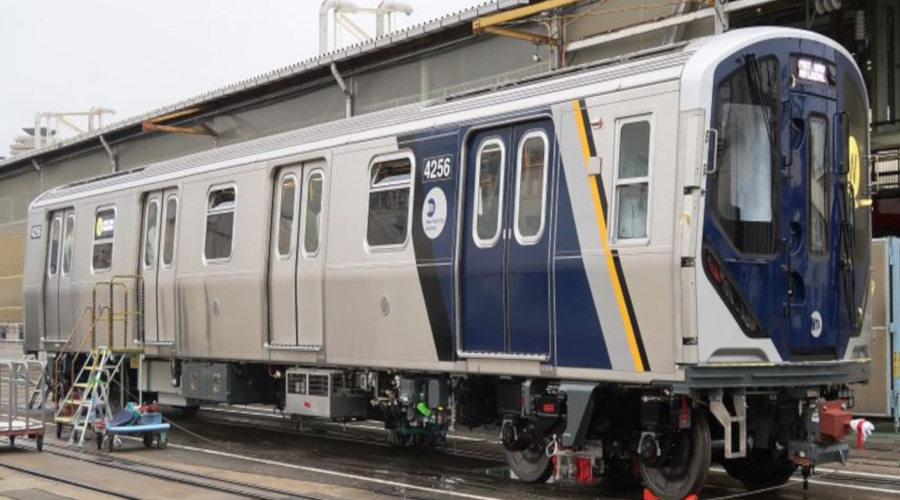 MTA New York City Transit (NYCT) yesterday unveiled the design of its newest subway cars now in production at the Kawasaki Rail Car Inc. facility in Lincoln, Nebraska. Thirty pilot rail cars will be delivered for testing by the end of the year.

Some cars also will feature an open-gangway design that will replace the door between cars with an accordion-like connector to create longer spaces to allow for greater rider flow and movement between cars. The feature was designed to reduce crowding and distribute passenger loads more evenly throughout the train, NYCT officials said in a press release.

“These new cars represent the future of the New York subway and will be the new standard for all new NYCT subway cars going forward,” said Frank Jezycki, NYCT executive vice president and chief operating officer for the Department of Subways.

In 2018, the MTA board approved a $1.4 billion contract with Kawasaki for 535 R211 cars. Following testing of the pilot rail cars, production work for the base order will be spilt between the Lincoln facility, and another Kawasaki facility in Yonkers, New York.

The cars will serve on the subway’s lettered routes and the Staten Island Railway.

Inside look at MTA NYCT's newest subway cars being produced at the Kawasaki Rail Car facility in Lincoln, Nebraska. Thirty of them will be delivered for testing by the end of the year. https://t.co/lKw2lQvCic pic.twitter.com/eX42gCHKfA