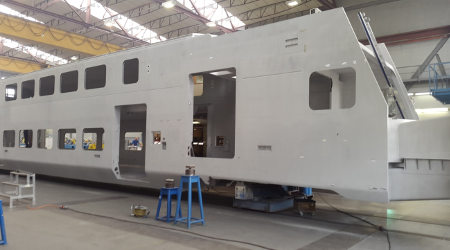 The first new cab car shell in Caltrain's electrified fleet has undergone first article inspection and has been cleared for painting.

Part of a 96-car order for Caltrain's electrification project, the unit now is being painted with the exterior design selected by riders. Stadler U.S. Inc. is manufacturing the trains.

The railroad's second cab car shell is being sent to a lab to undergo structural verification testing, Caltrain officials wrote in a May newsletter.

In August 2016, Caltrain awarded a $551 million contract to Stadler to build the cars, which will be assembled in six-car trains.

Meanwhile, crews this month continued installing foundation and poles for the electrification project. In June, workers will begin constructing a traction power facility in San Jose to bring power to the system.