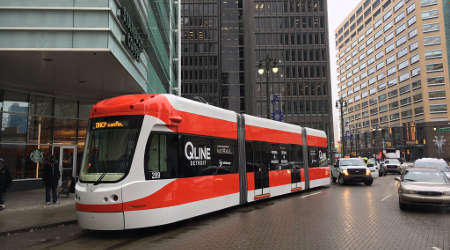 The company wrapped up QLINE's six-unit order ahead of contractual delivery dates, Brookville officials said in a press release.

Since September 2016, QLINE has been testing a pilot vehicle in preparation for the line's opening scheduled for May 12.

Designed and manufactured at Brookville's Pennsylvania plant, the streetcars will travel along a 6.6-mile loop on Detroit's Woodward Avenue.

For 60 percent of the route, the units will move without the aid of an overhead contact system and instead will use an onboard battery energy storage system, Brookville officials said.

At 66.5-feet-long, each streetcar can transport up to 125 passengers.

"Brookville worked with us every step of the way to ensure the QLINE would meet its spring 2017 operational launch," said Matt Cullen, chief executive officer of M-1 Rail, which will operate QLINE. "Our vehicle testing and training programs benefited from the early vehicle deliveries and we are looking forward to our May 12 grand opening."

Brookville has delivered Liberty streetcars to Dallas Area Rapid Transit and is under contract to build similar units for Oklahoma City and Milwaukee.