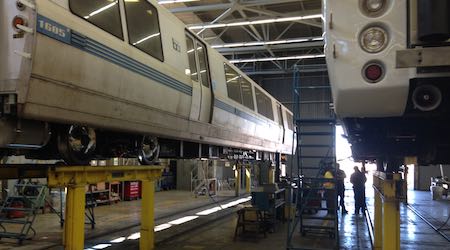 Bay Area Rapid Transit (BART) has finished repairs to the final two severely damaged cars as part of an effort to return all sidelined cars to service.

Repairs to the cars were "above and beyond" routine maintenance, BART officials said on the agency's website last week.

One car was out of service since a derailment in March 2011 and had an "obvious twist" in it, agency officials said.

"We had to replace each beam so the car didn’t turn into a noodle and twist up any more than it was,” said John Allen, a transit vehicle mechanic at BART's repair shop in Hayward, Calif.

The other car was severely damaged when it caught fire in 2013. BART's repair teams then had to replace a large section of the floor of the car.

This month, both cars will undergo testing on the mainline track; once approved, they'll return to service.

"These could have easily been scrapped two or three years ago. But I think it’s worth it that we salvaged them and they’ll be good revenue-service vehicles," said Jorge Madrigal, a vehicle systems engineer at the Hayward yard. "They're going to be as safe as every car that is in the system.”

The reason behind repairing all the severely damaged cars is to have as many cars as possible to address crowding and to prepare for the opening of the Warm Springs Station this fall, BART officials added.