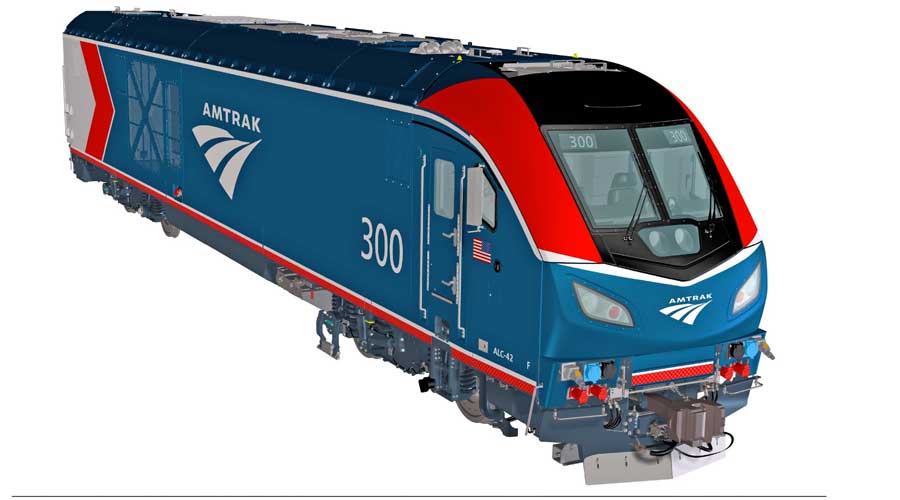 Amtrak yesterday released renderings of the first of the diesel-electric locomotives that will replace the current fleet on its national network, including long distance and many state-sponsored routes.

Five of the first six locomotives will be painted in Amtrak's current Phase VI scheme and one will be painted to recognize the 50th anniversary of Amtrak's service launch next year. The red chevron at the rear of the ALC-42 is an homage to Amtrak's original Phase 1 livery, which also had a red chevron on the side. A final livery will be unveiled later as part of a fleet-wide plan, Amtrak officials said in a press release.

The ALC-42 series, developed by Amtrak with Siemens Mobility, is equipped with positive train control and crash energy management systems. They have alternating current propulsion for a maximum speed of 125 mph. The 16-cylinder Cummins QSK95 engine has Tier 4 emissions technology to reduce nitrogen oxide by more than 89 percent and particulate matter by 95 percent, while providing a savings in diesel fuel consumption, Amtrak officials said.

Amtrak announced the initial order of 75 new locomotives in December 2018, with deliveries expected through 2024. Amtrak also has a provision to order additional ALC-42 locomotives.

The new locomotives are part of Amtrak's long-term planned series of improvements for fleet, infrastructure and stations, including new Acela trainsets now undergoing tests to begin service next year.