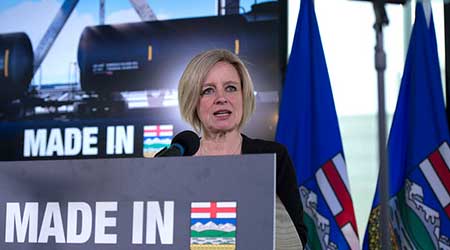 Alberta Premier Rachel Notley announced yesterday an agreement with Canadian Pacific and CN to lease 4,400 rail cars to move crude oil by rail from the Canadian province to U.S. and international markets.

The first shipments are expected to begin as early as July; when at full capacity, the cars will move up to 120,000 barrels per day by 2020, according to a press release issued by the Canadian province.

Alberta officials announced late last year that they were negotiating an investment into new car capacity to move more crude via rail as part of short- and medium-term solutions to getting more oil to market.

"Each and every Albertan owns our energy resources and deserves to get top dollar for them," said Notley. "We are taking decisive actions to protect people and to protect our natural inheritance."

The Alberta government's investment in increased rail capacity totals about CA$3.7 billion, provincial officials said. With the anticipated commercial revenue and increased royalty and tax revenue, the province anticipates generating about CA$5.9 billion over the next three years.

The provincial government will purchase the crude from producers and load it onto rail cars at various facilities, Alberta officials said.

In developing its crude-by-rail strategy, the government has "taken care to ensure that additional rail cars carrying oil will have no impact on the shipments of agricultural products," they said.