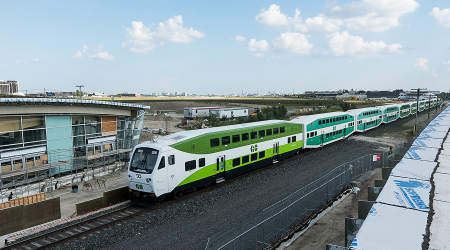 The new units will support an increase in the number of trains that operate on GO Transit's seven commuter-rail lines.

The Canadian government will provide CA$93 million through the Public Transit Infrastructure Fund, while the province of Ontario will cover the remaining costs.

The funding will be used to accelerate the purchase, which will enable GO Transit parent agency Metrolinx to meet forecasted service levels beyond 2018, according to a press release issued by Infrastructure Canada.

The 53 units are part of a larger order of 125 coaches. The first unit is expected to be delivered later this year.

The announcement comes as Metrolinx continues to roll out the GO Regional Express Rail program, which involves hundreds of infrastructure upgrades to help boost commuter-rail service in the Toronto area.