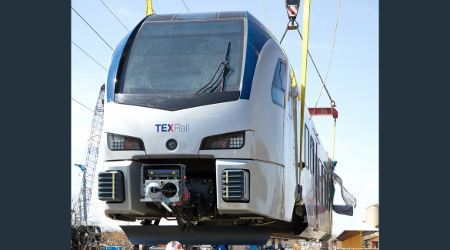 The Fort Worth Transportation Authority earlier this month took delivery of the second trainset for its TEXRail commuter-rail system.

Built by Stadler, the unit was unloaded in Grapevine, according to a tweet from the agency, which has been rebranded as Trinity Metro.

In total, the agency has ordered eight trainsets from Stadler. The units' shells are being manufactured in Hungary and then finished at Stadler's new plant in Salt Lake City, said Trinity Metro spokeswoman Laura Hanna in an email.

The units will be stored at a Fort Worth equipment maintenance facility, which is slated to be finished soon, she said.