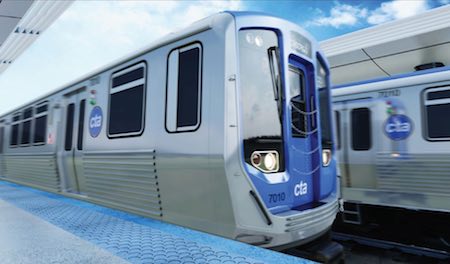 As part of its winning bid, the company has pledged to construct a new rail-car assembly facility in Chicago, which will be the first of its kind in 35 years, CTA officials said in a press release.

Expected to generate 170 jobs, the plant represents an investment of $40 million.

CSR will complete prototypes of the new 7000-series cars in 2019. Following testing, the cars will go into service in 2020.

CTA will purchase a base order of 400 cars first, with options to purchase the remainder in the future.

"This rail car purchase — the largest in CTA history — will give CTA one of the newest fleets in the United States and provide our customers with state-of-the-art trains providing comfortable, reliable rides," said CTA President Dorval Carter Jr.

The cars' design, which was based on riders' feedback, will resemble the 5000-series with stainless steel bodies, LED lighting and signage, and AC power propulsion. On the interior, the units will feature a mix of forward-facing and aisle-facing seats. The seating configuration is designed to provide customer comfort while maximizing passenger flow and capacity, CTA officials said.

After delivery of the new units is complete, the agency will have its youngest rail fleet in decades, with the average age of its rail cars decreasing from 26 years to 13 years.

The cars are expected to save the CTA $7 million annually in reduced maintenance costs and reduced use of power, agency officials said.

CSR's partners include the Chinese state-owned rail-car manufacturing company CRRC Qingdao Sifang and CSR America, according to the Chicago Tribune. CRRC had previously been awarded a $556 million contract to build 284 rail cars for the Massachusetts Bay Transportation Authority.