What does 2019 look like for the rail finance and leasing sector? Depends on who you ask 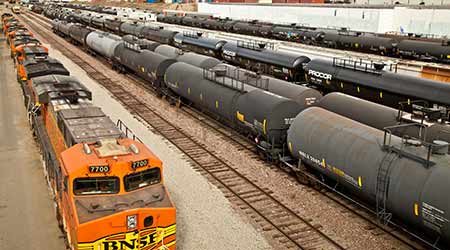 Will business be better this year than it was last year? Will it be about the same? Worse? What are the key issues facing the rail finance and leasing sector in 2019?

We posed these questions last month to a sampling of rail finance and leasing execs as part of the information gathering for our 19th annual Finance & Leasing Guide. The guide was published in our February issue.

But many execs are pretty sure about some things this year. Some expect lease rates to rise. Others noted they'll need to contend with the new lease accounting standards that went into effect Jan. 1.

What else are they sure of? What else did rail finance and leasing folks tell us about what they expect during the year ahead? Read on for a sampling of their responses.

Same as last year, and [we] expect not much to change as the political/economic atmosphere is so uncertain.

I think 2019 will start to slow down a bit, meaning worse than 2018, and the uncertainty of tariffs, government shut down, etc. — in other words Trump — will be the biggest issue facing global trade and the U.S. economy, and by proxy, rail in the U.S.

We expect merger-and-acquisition activity in the first half of 2019 to continue at a strong 2018 pace. The second half may get a bump as owners become concerned about the 2020 election, but the overall late-2019 outlook is murkier due to the cross-currents of a dysfunctional divided government, a China trade deal and a slowing global economy.

We expect 2019 to be slightly better than 2018, but there is much uncertainty and concern regarding trade, infrastructure legislation and regulatory overreach.

2019 should be better. We have a large equipment backlog and humming economy.  Rail-car loadings continue to increase at the rate of GDP+.

In the rail equipment markets, 2019 should be somewhat better than 2018, since most indicators will be the same or better than last year, particularly rail freight volumes. Most of the key segments have a positive outlook, but a few will be challenged.

2019 looks to be an interesting year. Given tariffs and global economic concerns and considerations, we expect segments of the industry to be flat (steel/scrap); while we see increased opportunities in lumber, coke, sand and aggregate and some stabilizations in the coal market, given some needs to stockpile and on-going opportunities for export.

We see growing interest by ports and public development agencies to invest in rail infrastructure as way to boost their regional economies. This trend, combined with ongoing transfers of lower-volume rail lines from Class Is to short-line operators, helps refocus attention upon customers and business development.

Business may be more challenging as railroads complete implementation of precision scheduled railroading (PSR). Velocity will likely improve and service bottlenecks will be reduced, all of which could dampen demand for equipment. On the supply side, things should get better as surplus equipment is dismantled. The big issue will be how to manage underperforming car types on the balance sheet. Overall rail activity should grow in low single digits.

2019 will be more of the same from 2018, although at more moderate growth rates. Many sectors of the economy remain strong and carloads reflect this.

What is the key issue facing the rail finance/leasing sector in 2019? Why?

The big "new" item is the accounting change affecting leases. Will that shift behavior from preferring leasing to buying? If so, will that begin in 2019 after companies comply with the new rules?

As the supply/demand balance tightens in 2019, hopefully, lessors will see some strengthening in lease rates. Compliance with the new lease accounting standards that went into effect on Jan. 1, 2019, for publicly traded U.S. companies will challenge many rail-car lessees.

As a rail-car operating lessor, transportation consultant and management services provider, we believe the key issue facing the rail finance/leasing sector in 2019 will be the same as it has been for several years: asset overvaluation by many new market entry participants who aren’t familiar with rail’s idiosyncrasies and are anticipating a quick return; and a lack of availability of car types that customers demand that have not been on the “build-it” list for the past decade or so and have suffered from attrition.

The key issue remains fairly assessing risk and de-risking a rail-finance transaction. Two reasons: most lenders (and many in the rail industry) have difficulty understanding rail-related collateral, cash flows, and valuation—and most railroads and developers miss opportunities to combine public and private capital in rail finance.

One issue is how to manage underperforming assets. Some portions of the fleet form almost a “stranded cost” issue in that the equipment is still relatively young from a balance sheet and condition perspective but commercially surplus. As traffic mix repositions the longer lived assets may restrict the alignment of equipment with evolving demand.

The biggest issue facing the rail leasing market is what effect precision scheduled railroading will have on equipment utilization. If underutilized assets are obsolesced, it may impact lease rates.