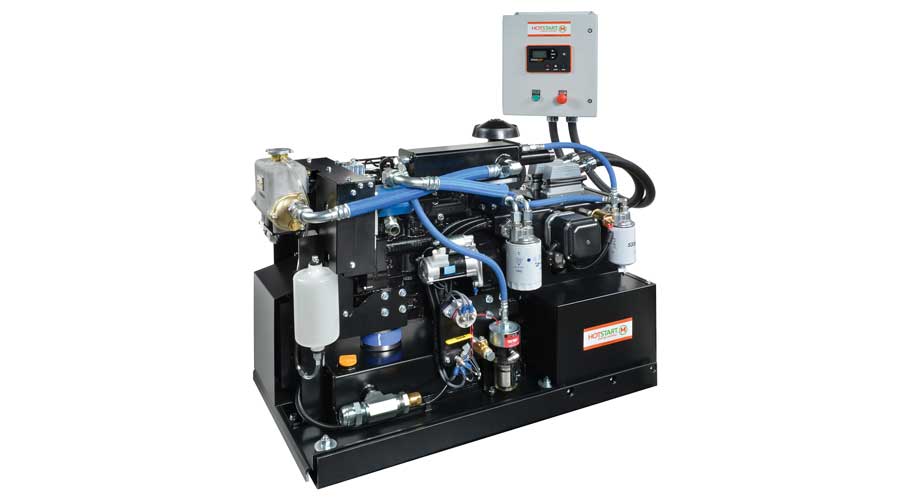 Fuel consumes a considerable portion of railroads’ budgets. Finding ways to reduce fuel usage is always a priority — both to save money and reduce greenhouse gas emissions.

In 2018, U.S. railroads moved a ton of freight an average of 473 miles per gallon of fuel, according to the Association of American Railroads (AAR). On average, railroads are three to four times more fuel efficient than trucks, AAR says.

What fuel management products and services do railroads have at their disposal? Progressive Railroading reached out to a cross-section of suppliers to tell us what’s new, as well as tried and true, on the technology development front. Following are summaries of seven emailed responses.

By providing heat to the engine and lubrication oil, the Hotstart APU allows locomotives to shut down in any location at any time while retaining the ability to restart immediately — even in the coldest conditions. Designed from the ground up to work seamlessly according to a locomotive’s day-to-day operations, the APU includes an easy-to-use operator interface, automatic operation and integration capability with automatic engine start stop systems (AESS), Hotstart officials said. 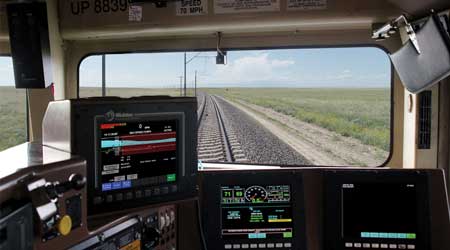 A view from a NYAB’s LEADER on a locomotive engineer’s screen.
New York Air Brake Corp.

Safely running long, heavy trains is of great interest in the precision scheduled railroading world as railroads seek to maximize asset utilization. NYAB customers report they are running longer, heavier trains with no derailments or break-in-twos, and credit LEADER’s ability to accurately predict run-in and run-out impacts and take action in real time to minimize in-train forces, regardless of power distribution or consist, company officials said. 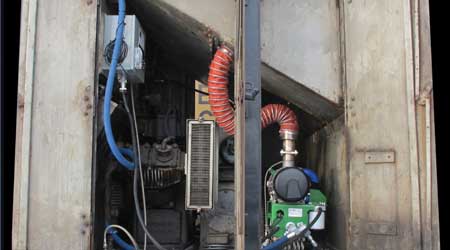 Historically, idling has been viewed as a necessary evil for locomotives in freezing winter temperatures. Idling keeps the engine warm, but wastes fuel and increases emissions. The idle reduction technology of the PowerHouse™ by Power Drives Inc. addresses that issue.

The PowerHouse can heat and circulate locomotive coolant through the heat exchanger, maintaining water temperature above 100 degrees F, even in the coldest temperatures. It significantly decreases energy wasted through idling. As a result, it delivers the benefits of increased fuel savings and reduced noise and air pollution, Power Drives officials said.

The PowerHouse is an EPA SmartWay-verified technology, compliant with EPA Tier 4 emission standards. It is available in two operating models: the APU and the 120. The 120 model is used when locomotives have ready access to 120-volt (5-amps) shore power. The unit comes with oil circulation and remote monitoring capabilities.

The APU model is a modular, two-piece device that offers installation flexibility and is ideal for road haul and run-through locomotives, Power Drives officials said. The APU also includes standard remote monitoring for access to real-time operating data, and charges the locomotive battery bank while the prime mover is shut down. Heat for the APU is provided by a diesel-fired heater instead of electrical elements, which results in significantly less maintenance, company officials said. 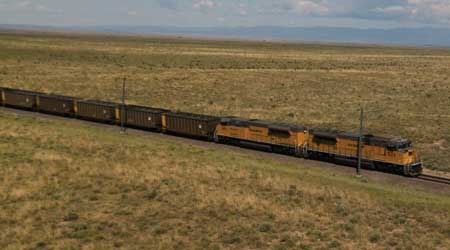 Progress Rail is striving to place more emphasis on its digital suite of connected solutions. Energy management and train automation is at the forefront of those digital tools.

Leveraging operational data to reinvent how a railroad operates can save thousands of gallons of fuel by detecting potential problems before they occur, according to the company. In response, Progress Rail’s Uptime® Suite can be used to more effectively manage operations. Advanced asset monitoring combines with Progress Rail’s Locomotive Monitoring Center expertise to offer customized reports and streamline data delivery, company officials said.

With the enhanced capabilities to assess engine system health and determine “fuel hogs,” as well as provide virtual load testing and a fleet-level fuel management dashboard, Uptime “remains a critical element” to maintaining an efficient locomotive fleet, they said. 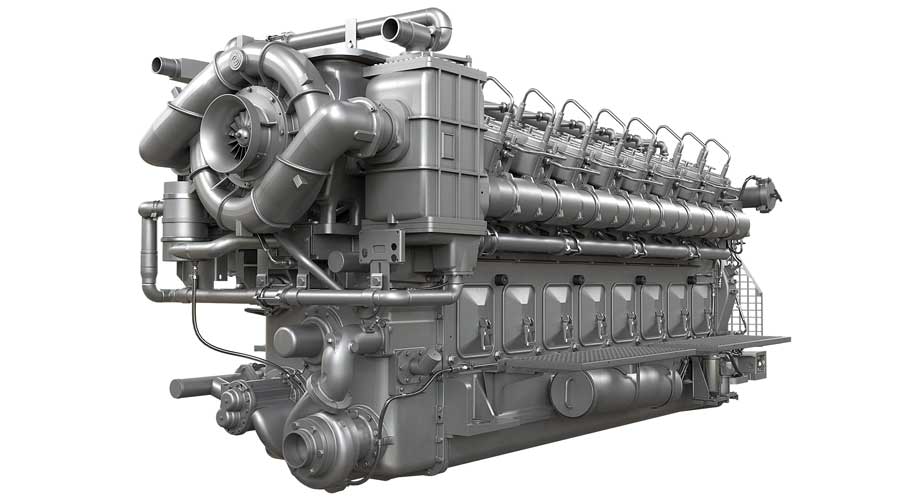 Wabtec plans to roll out the FDL Advantage this year.
Wabtec Corp.

There are more than 10,000 locomotives with FDL engines in operation today with up to 500 overhauls scheduled per year. It is a large market representing a tremendous opportunity to reduce emissions and operating costs for the rail industry, Wabtec Corp. officials said.

At Railway Interchange 2019, Wabtec introduced the FDL Advantage, an engine performance upgrade to the existing FDL engine that’s designed to provide significant fuel savings at the Tier 1-plus emission level.

Railroads that use FDL Advantage could register fuel savings of up to 5 percent and corresponding carbon-dioxide reductions on an engine that has been in production since the 1950s. For a locomotive consuming 200,000 gallons, that could mean $25,000 savings per asset per year, company officials said.

FDL Advantage features improved air handling and injection control — updates that allow for improved tuning of the engine, they said.

In addition, other design elements have been incorporated to improve the product’s reliability. Wabtec plans to roll out FDL Advantage later this year.

Meanwhile, Wabtec’s Trip Optimizer, which has been available since 2009, is a smart train cruise control system that takes into account terrain, train makeup and speed restrictions to calculate an optimum speed plan. It then automatically controls locomotive throttle and dynamic brakes to the plan. Trip Optimizer is EPA-certified to save 10 percent of fuel.

Currently installed on more than 11,000 Wabtec locomotives globally, the device has saved 400 million gallons of fuel, the company estimates. 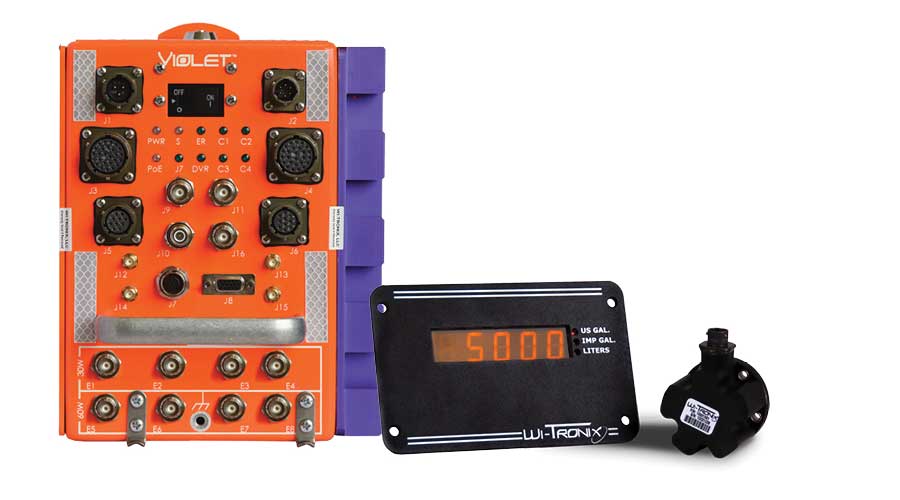 Since fuel is their second-largest operating expense, railroads are tapping into the benefits of connected platforms to make huge strides in fuel management, Wi-Tronix LLC officials said.

The Wi-Tronix Violet Edge Fuel Management Solution is designed to provide real-time, accurate, reliable data and diagnostics on such parameters as locomotive idling time and fuel tank levels. The system also offers comparisons among asset and crew data from HPTT, APU, AESS, EMS and other systems. 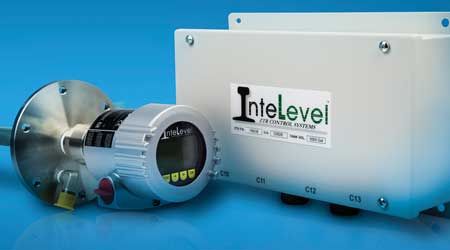 The system has a return on investment of less than 12 months and can save North American railroads 1.5 million gallons of fuel every month, they said.

The InteLevel system is designed for the rigors of railroading, therefore its accuracy is unaffected by foam, rust, scale or other commonly found tank conditions, ZTR officials said.

In addition, it can handle a railroad’s mechanical, environmental and temperature extremes, they said. The system also provides remote connectivity to fuel management data so railroads can better manage the fuel levels of their entire fleet.