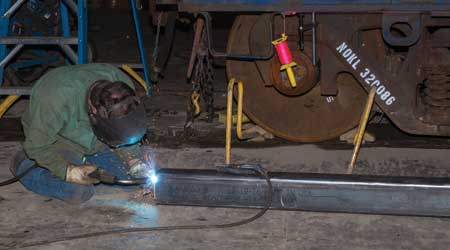 The decline in U.S. freight-rail traffic continued through October. At recent industry trade shows, railroaders and suppliers weren’t shy about acknowledging the sluggish and uncertain economy, noting that freight-rail capital expenditures were down for the most part this year, and could be down again in 2020.  But not all rail execs have been using the “D” word this fall.

Last month, Progressive Railroading reached out to a cross-section of rail-car repair shop officials. We asked if they’d been seeing more work coming their way this year, or at least in recent months — and, if so, what kind of business they were getting. In short: They’ve been busy, they told us, particularly on the tank-car repair and requalification fronts. And they expect to continue to be busy for at least the near term.

“Although 2019 isn’t a record year for car-shopping events, it definitely has been a strong year overall,” President David Smook said in email. “Tank cars have dominated. We’ve also experienced an unexpected increase in tank-car interior coatings work. Tank requalification was a major factor in the strength of our 2019 [success].”

The emphasis on tank-car repairs appears to be a carryover from 2018. More fleet owners have been asking shops to help them meet tank-car requalification standards over the past two years to comply with the Federal Railroad Administration’s HM-216B, which was issued in 2012, shop executives said.

The standard requires tank-car owners to adhere to requalification programs that ensure a tank car or component will not fail prior to its next scheduled inspection or test.

High demand for both tank- and box-car repairs also have characterized the year for Progress Rail, which repairs freight cars and tank cars, as well as supplies new, reconditioned, re-qualified and used freight-car components.

“Tank-car shop space has proven a necessity, as tank car qualifications continue to cycle through for fleets,” said Ryan Davis, the company’s vice president of freight car operations, in an email. “We’ve seen continued demand for regulatory testing and tank-car qualifications, and [we’ve] experienced a flow of freight cars returning from leased service, which amplified the need for storage, as well as repairs. This has partially offset market segments that parked or stored some cars, such as coal and seasonal slowdowns in frac sand deliveries.”

That’s a significant change from last year, when Progress Rail — which also is the largest supplier of reconditioned car wheels, axles and bearings in North America — noted “some upswing” in the sand segment, Davis said.

Tank-car work hasn’t been the only factor keeping some shops busy. In an email, officials at Herzog cited an increase in repair work due, in large part, to weather-related track problems. Extreme flooding in several states has been driving the need for track maintenance and repairs, they said, which also has resulted in increased equipment utilization and wear.

Herzog performs a variety of work on freight and specialty cars at facilities in St. Joseph, Missouri, and Fall City, Nebraska

The demand for more repair work will prompt at least one rail-car repair company to open a new shop in 2020. Headquartered in Fordville, North Dakota, Northern Plains Rail Cos. is building its second repair facility near Grand Forks, North Dakota. Slated to be operational by April, the new shop will be much larger than the company’s current repair facility in Erskine, Minnesota, and will feature 13,000 feet of track and six car spots, says Jesse Chalich, president of Northern Plains, which also operates a short line in Minnesota and North Dakota.

Initially, the shop will focus on standard repairs and cleaning, with painting and tank-car cleaning services possibly added at some point.

“We’re talking to a lot of customers right now and trying to figure out what they need,” Chalich says. “We work with a lot of food-grade cars, which can’t have any contamination. It’s crucial to keep them clean and up to standards.”

Some shop execs also expect the business uptick to continue as the calendar turns to 2020.

“Our 2020 goals are to enhance internal process improvements, with an increased emphasis on improving turnaround times,” Smook said. 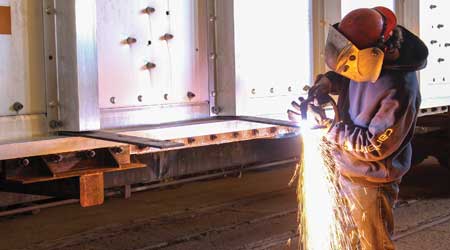 Herzog officials have noted an increase in repair work due, in large part, to weather-related track problems.
Herzog

“The demand for tank-car qualifications should remain consistent, due to the qualification cycles and required maintenance and testing,” Davis added. “Based off of industry needs, which can always fluctuate, we anticipate routine freight-car repairs and storage requirements for end-of-lease repairs to continue.”

There are caveats. Next year is an election year. And some railroads might continue to be conservative with capex.

“Like most crystal balls, ours is only as good as our customers’,” Herzog President Mike Mastio said in an email, adding that Herzog will be prepared for whatever comes.

“We continue to invest and promote new innovations for our customers and to improve our operations,” he added. “Our employees are trained to pursue newer, more productive solutions, so they are armed to handle our workload more efficiently and safely.”

“Although 2019 was stronger than anticipated, the steady falloff in rail traffic shouldn’t be ignored,” he said, citing Association of American Railroads’ data that shows traffic slowdowns in both carloads and intermodal units this year. “Strength in the tank-car requalification segment will need to continue for future car-shopping events to remain strong.”