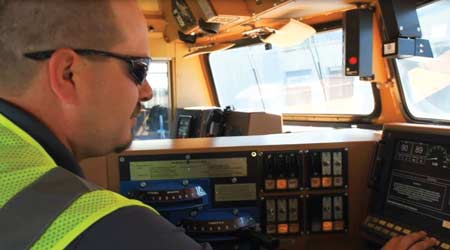 It’s no secret diesel costs rank among a railroad’s single largest expense. At Union Pacific Railroad, for example, fuel accounted for about 14 percent of the railroad’s total operating costs in 2017. A mere 1 percent reduction in fuel use would save UP millions of dollars, company officials say — which is why the Class I has set a goal of reducing locomotive fuel consumption by 1.5 percent through 2020.

To achieve that objective, UP is using its own wind tunnel to measure the impact of air velocity, temperature and barometric pressure on rail-car types, according to a post on UP’s “InsideTrack” blog. Software calculates the drag coefficient; a lower coefficient means less fuel is burned — and more money saved.

Earlier this year, UP ordered 112 covered hoppers that received aerodynamic modifications as a result of wind-tunnel testing. The railroad then sent the cars out for “real-world” testing via high-use, high-mileage service. In addition to tracking the modifications, Wayne Kennedy — UP’s senior manager of fuel conservation — compares the locomotive fuel burn of pulling those modified cars with that of trains pulling non-aerodynamic cars.

After three months and dozens of round trips, preliminary results indicated the car modifications provided a fuel savings of 4 percent to 6 percent, according to UP.

Other technologies and systems are available to help railroads save money by managing fuel more efficiently. Progressive Railroading recently asked a sampling of rail industry suppliers to tell us what’s new, as well as tried and true, on the fuel management technology front. Responses from nine companies follow.

That plan begins with critical railroad data — origin/destination, weight, length, car information, locomotives and speed restrictions — and then transfers the data wirelessly to the locomotive. An onboard computer plans the trip and provides the data to the closed-loop control system for automatic throttle and dynamic brake operation.

TO is an EPA-certified solution that delivers sustainable fuel savings (typically from 3 percent to 17 percent, according to the company, depending on train type and terrain), as well as consistent train handling and velocity performance, and reduced wear and tear. It is used by all the Class Is as well as railroads in South America, Africa, Asia and Australia, the company said. 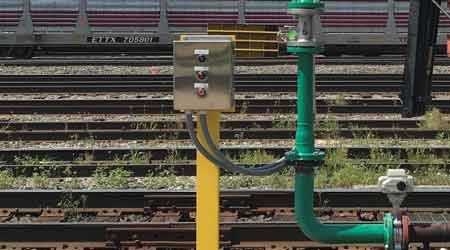 CWI Inc. offers RYDM, a patent-pending PC-based total system solution for fuel measurement and inventory management. Designed for the rail industry, the RYDM system provides fuel system metering, data accuracy and real-time data management, with an emphasis on accurate measurement, safety and data integrity. All product values are temperature-compensated throughout the system to improve accuracy, and the reporting capabilities of RYDM are customizable, according to the company. 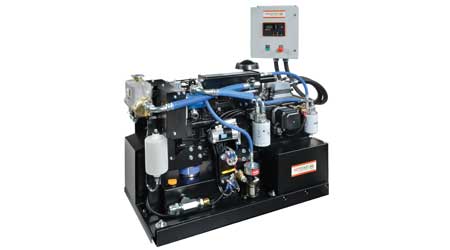 HOTSTART’s APU Idle Reduction Heating System is a self-contained coolant and oil preheater that uses a locomotive’s onboard fuel supply to heat prime movers without requiring a shore power connection. Unlike electric heating systems, the APU enables a locomotive to be shut down in any location by using the locomotive’s own diesel supply. Eliminating unnecessary idling means reducing fuel and oil consumption, emissions, noise, engine wear and wet-stacking, according to the company.

During normal operation, the APU consumes less than a half gallon of fuel per hour. Featuring four heat exchange points plus a built-in tank heater and heavy-duty alternator, the APU provides up to 19 kilowatts of total heating power and 80 amps of battery-charging power.

The APU’s design is intended to work seamlessly with a locomotive’s day-to-day operations, including an easy-to-use configurable display, real-time operating parameters, automatic operation and AESS-ready capability, the company said. 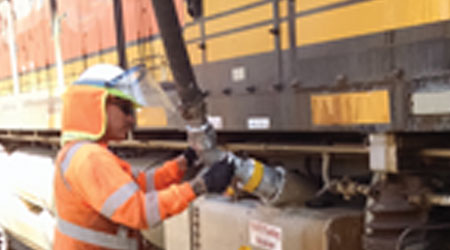 MPL Innovations’ SpillX™ Velocity locomotive fueling system is designed to increase fueling safety, speed and reliability. The system incorporates proven fueling technologies from other major industries and enables locomotives to be fueled safely at rates up to 600 gallons per minute, the company said.

SpillX uses a dry-break single-point connection in conjunction with reliable overfill protection technology to eliminate fuel spills while increasing the overall speed of network operations. The components can be installed trackside on the locomotive in less than 15 minutes per fill port, and the aviation-proven nozzle can be installed in less than five minutes, the company said.

Once installed, the nozzle cannot be opened until securely connected to the locomotive, and it cannot be disconnected from the locomotive until the nozzle is fully closed — thus eliminating the possibility of an accidental discharge of fuel from the nozzle. The system is designed to meet all operational parameters of the Association of American Railroads’ 2001 recommended practices for locomotive fueling. 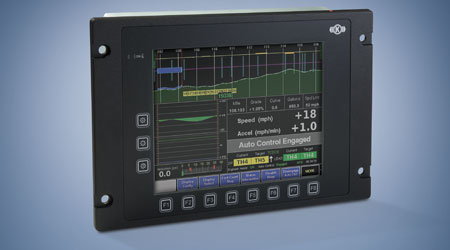 Similar to an airplane’s auto-pilot, LEADER is software installed onboard the locomotive that dynamically manages run-in and run-out forces while following a railroad’s operating rules. As a result, LEADER has a track record of delivering fuel savings of 6 percent or more, the company said.

LEADER receives GPS data on train speed and location, and performs thousands of “look-ahead” calculations per second to make precise decisions on how best to operate the train. The software also can accept change orders or adapt to other operating conditions in real time, and the system precisely controls asynchronous distributed power, resulting in a wealth of opportunities to minimize in-train forces, improve safety and save fuel, the company said. 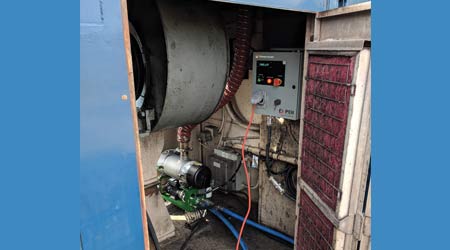 The PowerHouse is designed to improve fuel efficiency and save energy wasted during idling by heating the engine coolant and oil.
POWER DRIVES INC.

Power Drives Inc.’s PowerHouse is an idle-reduction technology designed to improve fuel efficiency and save energy wasted during idling by heating the engine coolant and oil. This prevents freeze-ups and allows easy engine starts, the company said.

The patented PowerHouse is available in two models: the APU (Auxiliary Power Unit) and the 120. The APU incorporates a Tier 4-compliant, 9.5-horsepower Kubota diesel engine that drives the alternator, powering the pumps and trickle-charging the locomotive battery bank. Once at temperature, the APU consumes 0.38 gallons of fuel per hour rather than the five to nine gallons per hour consumed by an idling locomotive.

Designed for locomotives with access to shore power, the 120 operates from a 120/240 VAC external power source and consumes 0.35 gallons per hour once at temperature. Both units feature the PowerHouse heat exchanger, which quickly heats and is rated at 136,000 BTU/hour.

The PowerHouse has helped Class Is and short lines significantly reduce fuel consumption while reducing maintenance costs as the result of fewer operating hours, the company said.

Progress Rail offers a “fuel savings suite of products” for all locomotive makes and models, the company said. For example, Progress Rail “relies on New York Air Brake LLC’s LEADER® management system to tap into the train’s current state, including geography, operating constraints and goals,” the company said. LEADER adjusts to train behavior and offers fuel savings of up to 10 percent, emissions reduction of up to 10 percent and improved train handling.

Meanwhile, Progress Rail developed SmartConsist™ to provide an additional 1 percent to 3 percent in fuel savings, for total reductions up to 12 percent, the company said. SmartConsist sets each locomotive to its individual, prime throttle position within the consist to improve overall fuel economy and reduce emissions, while achieving required power and tractive effort.

Additionally, the company’s Automatic Engine Start/Stop solution (AESS™) monitors critical operating parameters during locomotive idle operation. EMD AESS™ reduces idle time by more than 50 percent and improves locomotive fuel ef­ficiency by up to 29 gallons per day for switcher use and 18 gallons per day for line haul operation, the company said. 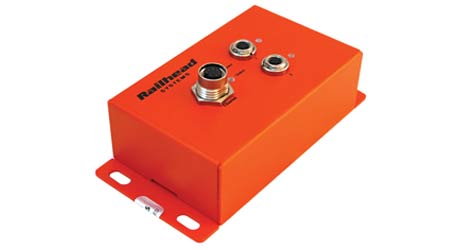 Railhead Corp. has partnered with Trimble Rail to integrate real-time remote monitoring, diagnostics and onboard video to maximize locomotive asset utilization and productivity. As part of the collaboration, Railhead offers the Trimble® R2M remote diagnostic and Trimble® P2M in-service tools in the U.S. market.

Integrating with control room and maintenance depot environments, the solutions analyze timetable performance and perform section-delay analysis to identify trends as they occur within a fleet. Through a combination of journey planning and improved driver awareness, remote diagnostic and in-service performance planning and management systems maximize energy and fuel efficiency, the company said.

The Trimble R2M and P2M use a combination of real-time locomotive diagnostic data and fuel usage information (such as acceleration and braking) to improve running patterns and achieve fuel savings. With real-time cross-fleet monitoring and trend analysis, train operators can identify rogue fuel usage by route and timing points through analysis of engine behavior across fleets and drivers. 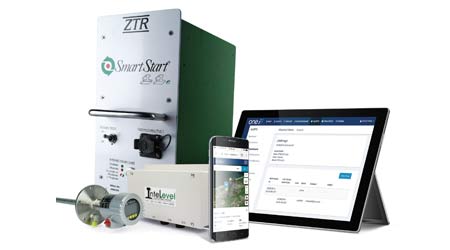 ZTR Control Systems’ fuel and railway Internet of Things (IoT) solutions can be applied to locomotive fleets and other rail assets to provide “a holistic view that helps you solve fuel issues and gain greater insights into your overall operations,” the company said.