Rail finance and leasing execs expect a more business-friendly environment, and a better year, in 2017 — survey 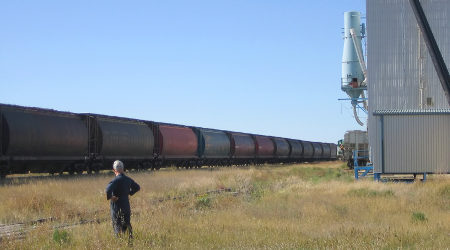 How is 2017 likely to shape up, business wise, for the rail finance and leasing set? Will it be better than 2016?

Many finance and leasing execs tell us they think it will, in large part because they expect the Trump administration to cultivate a more business-friendly regulatory environment.

Many also expect to confront some of the same challenges and market conditions they've been grappling with the past couple years.

A sampling of North American railroad finance and leasing officials shared their thoughts via responses to survey questions we sent during the information gathering — most of the responses were penned before President Trump took office — for our 17th annual Finance & Leasing Guide, which was published in our February issue.

What else are they thinking about? Their lightly edited responses to our 2017 survey questions, which were submitted via email or shared during telephone conversations, follow.

Better. If liquidity chasing rail deals begins to dry up, it will be good for [companies] committed to the market through cycles. For current asset owners, the prices and lease rates are expected to continue softening, which may stress some operators and lead to some consolidation.

From a business perspective, we anticipate that 2017 will be a better year than 2016. We anticipate seeing some stabilization in both coal and oil based on a few positive factors — for instance, the [new] president slowing the war on coal [and] the EIA prediction that natural gas prices will continue to trend up. And if OPEC and non-OPEC member countries can agree to stick to their agreements, as the price of oil moves, we anticipate with some delay a more positive number of carload originations in the energy space. We anticipate record setting new (and some old crop carry in) crop corn and soybeans continuing to have strong transportation demands. Additionally, [given] the need to focus on highways, bridges and other infrastructure, we anticipate stone, sand and aggregates as well as the steel and scrap industries to benefit, all of which should encourage rail-car utilization for open-top hoppers and gondolas.

While 2016 was a difficult and complicated year for most car builders, [our] focus was on continuing to establish itself in the market and working with our customers to offer them solutions to their problems and make them more successful. It is not about us, it is about them. ... One thing is clear to me, and it is that 2017 will be a year of growth and positive forward movement for [us]. ... Because of our long-term view, we are unfazed by the state of things today and know that with our partnerships, capacity, capability, hard work and global expertise we will be successful now and into the future.

We think it will be better and have staffed up for that scenario. The new administration is business friendly and has also promised to utilize America’s energy resources, including coal, both of which bode well for railroads and their equipment suppliers and service providers.

BETTER — due to reductions in governmental regulations and increase in domestic infrastructure projects.

Better. Freight volumes in 2017 are expected to rise in most segments over a very poor 2016, which will increase rail-car demand and help reduce the surpluses that were built up over the last 15 months. Strong retirement rates will also have a positive effect on supply/demand balance of the fleet.

[We expect] the U.S. economy to grow more rapidly in 2017, as a result of changes in the tax code, some deregulatory efforts and new investment in U.S. industry. Worldwide, the picture is more clouded. We expect economic growth to continue in Europe, to resume again in CIS countries, and to continue to be relatively strong in Asia. Rail freight traffic will continue its shift from commodities to industrial goods and containerized traffic.

We are optimistic that 2017 will be a better year than last. Increased volumes in intermodal, industrial and coal are likely to help the industry turn around.

2017 will be better — impact of polyethylene on petrochemical industry and exports.

Our view of 2017 is that many industrial products will be mostly flat, year over year. We do expect to see improvements in the petro-chemical and intermodal markets in 2017 vs. 2016.

We are very optimistic about our container and logistics businesses. [But] we expect our rail-car leasing business for be soft across the board — for the entire rail market until late summer 2017

Compared to 2016, we expect 2017 to be marginally better for U.S freight rail because year-over-year revenue declines in the past three years have forced rail operators to become more efficient and positioned them to take advantage of potential favorable economic environment governed by a more business-friendly administration. However, we expect U.S rail companies to continue remaining challenged at discovering revenue growth opportunities to offset declining coal volume shipments and at overcoming “existential threats” resulting from technology-enabled shifting transportation capabilities.

Worse; the overbuild of the last three to four years will continue to hurt the leasing market for years to come; some lessors and shippers have assets that are permanently impaired.

Worse. More cars in storage and unusually low rents while Class I railroads charge extraordinarily high rates and are inflexible regarding empty cars movements to position for new lessees.

I believe 2017 will be worse overall for the leasing business. Oversupply of locomotives is a current issue. Inexpensive capital has also contributed to the ability of end users to acquire power vs. leasing. Beyond this, large leasing companies have successfully upped their marketing and dropped their pricing to the point where it is nearly impossible to compete.

2017 will be challenging due to change in the traffic mix, as well as an increase of capital demands along with increasing customer expectations. [We have] lived through previous downturns and [have] helped customers through these challenges successfully.

What is the key issue facing the rail finance/leasing sector in 2017? Why?

As a rail-car operating lessor, transportation consultant and management services provider, we believe the key issue facing the rail finance/leasing sector in 2017 will be the overall competitive environment for business in the new year. With older rail assets still in the system while a significant number of new build equipment (particularly high cube covered hoppers for grain, plastic pellets and frac sand) rolls off the assembly line, we anticipate seeing a continued market discrepancy on asset returns. It will take a while to work off some of the surplus assets currently in storage.

The key issues facing rail leasing/financing in 2017 are what they have been for the past one to two years — high numbers of cars in storage, existing cars, because of segment downturns (oil pricing, for example), being available for sale or lease at low rates, and also the looming regulatory mandates in the existing DOT111/CPC1232 oil tanks cars. All these factors lead to downward stress on lease rates, significant fleet upgrade cost requirements and stress on the overall profitability of the leasing groups in the next few years.

The key issue facing the rail finance/leasing sector in 2017 will be forecasting the shifts in need for different types of freight cars, based on the impact and timing of new administration’s policies when and if enacted.

We continue to work through an extreme overbuild in the industry, and that — combined with faster rail turn times, slower than expected growth in the chemical segment, and depressed oil and gas prices — [has] created a situation where rail-car supply will be greater than demand for a protracted period of time, and create one of the longest downturns the industry has seen. The industry would benefit from lessor and builder consolidation, and capacity being taken out of the marketplace.

Huge cost burden on car owners and shippers due to the mileage-based charges of empty private tank cars to and from repair facilities. ... Hopefully, this will be evaluated in 2017 and tariffs will be eliminated.

Overabundance of coal cars on the market.

The key issue is the hunger (for high profit) of large leasing companies. Through driving rates incredibly low and not "showing up" at the last few auctions, they have effectively shortened the rope for all of us. Their advantage is in the volume. Adding in, with the rapid turnover (changing of the old guard) as more executives and managers retire, I see the new generation failing to perceive the value of quality locomotive assets. Numbers do not lie and they control everything in business. I see for 2017 a continued overabundance of locomotive assets, extremely low rates and north American lease fleet health starting a decline as well as major scrap projects restarting. I am hopeful for more economic growth to absorb a number of surplus locomotives and prevent major scrapping. I am hopeful money will be reinvested into the current "reliable" fleet; however, I just do not see enough growth possible.

There is an excess volume of MOW equipment in the market today. This has had a negative effect on utilization numbers.

Rail car pricing. Improvements in the 2017 freight environment will help reduce the surpluses and bring the fleet back in balance. These gains should be enough to stabilize rail car lease pricing for many segments. However, we don’t believe the gains will be significant enough to translate into large, meaningful increases in rail car lease pricing.

Two factors will be important for the rail finance/leasing sector in 2017: First is the level and type of rail demand — growth? in what commodities or traffic types? Second will be the level of interest rates. We expect rail traffic to grow, but mostly in high-revenue commodities; many commodity-based freight cars will remain stored during 2017. We expect interest rates to increase slowly over the year.

Key issues include rail-car fleet sizing and utilization, and optimization of assets.

Oversupply of rail cars will continue to depress lease and car values for 2017.

Railroads and rail-related companies must organize their performance record, financial data and growth opportunities into a compelling case for lenders, investors and strategic partners.

One of the key issues facing lessors is lease rates significantly below investment targets.  This is mostly driven by lower energy prices, improved velocity, which impacts the number of cars needed and a short-term over-supply of rail equipment.

Lack of velocity of rail cars leased into the marketplace. Soft rail freight market since fall of 2015. Soft rental rates caused by oversupply of cars. Aggressive pricing on the part of captive leasing companies owned by rail car manufacturers. Aggressive pricing by “big box” banks.  Change of management at the top of Class Is.