Perspective: A Proposal for What's Next in Tank Car Design

Honeycomb Cargo, LLC has been working hard to bring a revolutionary alternative to legacy tank cars to the North American market. We have developed a patent pending architecture that is designed to mitigate the risk of hazmat by rail.

Our solutions are designed around the principle that a distributed architecture is a safer and more effective packaging strategy. Why is that? The fact is that every tank car on the rails today – including the new DOT-117s – have the same 45 year-old design flaw. They are all single-entity vessels. When you puncture them the entire payload (as much as 30,000 gallons of hazardous material) is vulnerable to leakage and explosion.

No matter how thick the steel or how much better the brakes, the design flaw is still there. And, if you investigate the history of hazmat derailments over the last 10 years you will find an abundance of evidence that proves this to be true. In fact, former National Transportation Safety Board (NTSB) Chairman Jim Hall noted in a recent column that "time and again, the NTSB showed how existing tank cars are inadequate to the task of surviving derailments."

"While cars are now being built to new standards, they still fall short in certain derailments, and even with that, many of the older cars can remain on the rails for another nine years," Hall wrote.

In addition, Karl Alexy of the Federal Railroad Administration (FRA) has noted publicly that "[a]t train speeds of 30 to 40 mph, you cannot build a tank car robust enough to withstand puncture in unit train derailments."

Here's the story. Our solutions are based on three key elements:
1.    A distributed architecture
2.    A shock absorbing material
3.    A modified and strengthened Intermodal container
Here are two functional diagrams of our distributed design to help you visualize this concept: 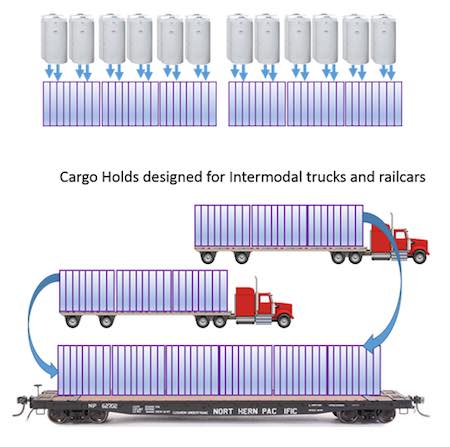 In comparison, imagine a tank car as an elongated tube (much like a water bottle)

As you can see, when the single-entity vessel is breached, the entire payload is exposed. This is the root cause of the damage that we have seen in almost every hazmat derailment to date. Whether the vessel is punctured or the valve is broken or the tank suffers a thermal tear from the excessive heat in a fire pool, the single-entity design flaw is where the greatest risk resides.

Solving this problem is surprisingly simple once the premise of the single-entity design flaw is accepted. The logical thing to do is to compartmentalize the cargo so that a single puncture cannot impact the entire payload. Hence, the creation of our distributed architecture using vertical storage containers.

Selecting a container to carry the distributed architecture is also based on logic and sound industry practices. Behold, the utilization of modified (fortified) intermodal containers. Helping the aggregate vertical storage containers bundled inside the intermodal containers to withstand brute force that can occur with derailment — along with providing something that can provide thermal protection against excessive heat — is another requirement. And so, our shock absorbing material was developed to serve as a barrier against puncture and also a thermal blanket to eliminate thermal tears and mitigate BLEVEs (Boiling Liquid Expanding Vapor Explosions).

Our revolutionary design is intended to deliver the next generation of hazmat packaging and transport solutions to the market before the next derailment. So what's taking so long?

The tank car manufacturers and tank car fleet owners are all reeling from an economic bubble that has been caused by the combination of the faulty tank car design and the recent PHMSA NPRM (HM-251) that mandates a very large number of tank cars that must be replaced and/or retrofitted to meet the new DOT-117 standards.

Here's the math: if a DOT-111 or CPC-1232 was purchased only 3 or 4 years ago at $130,000 per unit and has a typical 30-year amortization schedule, it must continue to generate revenue in order for it to meet the financial plans of the business that owns it.  If that tank car has been identified as a replacement target, then it only has 5 more years to make up the revenue that it would normally capture over 30 years. That, my friend, is impossible.

If the tank car in question has been identified as the type that can be upgraded to meet the new DOT-117 standards, it face an upgrade cost of as much as $70,000 per unit. In essence, that means it has to either extend the lifecycle by another 10 years or find a way to capture an additional $70,000 of the total revenue it was intended to capture over 30 years. No small task.

In addition, the new DOT-117 tank cars – which will cost between $180K and $220K per unit depending on who you ask – will have to survive the same 30-year amortization schedule. The problem with this is that the USDOT (PHMSA and FRA) cannot guarantee that the DOT-117s will not be outlawed any time soon. So, the new tank car investments are risky to say the least — especially since they have the same single-entity design flaw that their predecessors have been plagued with for the last 45 years.

But don't take our word for it. All of these economic challenges were clearly articulated in a recent Rail Tank Car Roundtable discussion hosted by the NTSB in Washington, D.C. on July 13, 2016. I recommend that any interested party watch the NTSB Roundtable webcast. It is very enlightening and has given us even greater conviction that we are on the right path. You can find the webcast video and the transcripts on the NTSB website here.

The webcast is long, so it might take some time to get through it all – but I promise it's worth it. If you take the time to watch and/or read the transcripts you will realize that the problem is purely economics. The incentive to protect investments (especially the fleet owners; companies like AllTranstek, GBW, etc.; and tank car manufacturers like Trinity, Greenbrier, ARII and UTLX) is greater than the incentive to make fundamental design changes needed to increase safety.

This is not an easy problem to solve with billions of dollars at stake. Government intervention can only do so much. The change we need will take an industry giant with the will and means to revolutionize an industry.

So how do we navigate out of this economic turbulence?  We have identified two possible paths:

1.    An industry outsider with the means and will to redefine the hazmat packaging and transport market must emerge. A giant like Caterpillar, Koch Industries, General Electric, Westinghouse or another company will be required to drive an industrial sea change. This is a logical path as there are billions of dollars on the table and the current players are all suffering analysis paralysis trying to figure out how to save their skins.

2.    An industry insider that has the vision, appetite and courage to make a bold move to bring new, innovative solutions like Honeycomb Cargo's to the forefront of the market as a complimentary solution to their existing product line. Adding an alternative solution and allowing the market to determine which solution will best meet consumer needs is a very risky proposition for a tank car manufacturer like Trinity Industries, Greenbrier, American Railcar or Union Tank Car. It means potentially cannibalizing (or at the very least dramatically reducing) their existing tank car business and risking billions of infrastructure created to build and maintain a very large quantity of tank cars.

The good news is the first one with the stomach to take this chance will be able to "own the market" by acquiring the IP and differentiate themselves as a clear industry leader.  They also will have generated a massive amount of goodwill as the first (and only?) manufacturer to put safety before profit — and, ironically, they'll make more profit than ever before. In addition, they'll set the pace for years to come as the migration moves from a slow and shallow ramp-up to a full-fledged industrywide deployment scenario.

Which of these two paths will win the day? The jury is still out, but the clock is ticking and it's just a matter of time before the next catastrophic hazmat derailment.

If it happens in a large urban area like Seattle or Chicago or Philadelphia there will be hell to pay – and the devil himself won't have deep enough pockets to cover the cost.