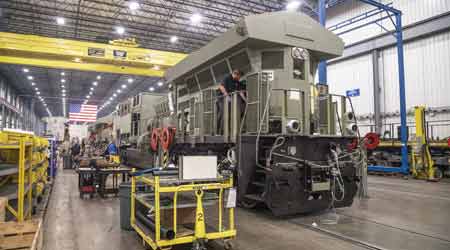 Carload and intermodal volumes have been on something of a run the past couple years. Tight capacity in the trucking realm has helped drive intermodal growth. And it’s meant good things for locomotive manufacturers.

For GE Transportation, the freight volume uptick has resulted in “promising locomotive sales to North American Class Is, short lines and international railroads,” said spokesman Tim Bader in an email.

“Railroads have pulled locomotives and freight cars out of storage, and are placing new orders to keep up with increasing traffic,” added Tim Wesley, vice president of investor relations for Wabtec Corp., in an email.

GE Transportation and Wabtec announced an $11 billion merger in May 2018. The deal is expected to close in early 2019.

Railroads aren’t just in the market for new power. They’re also looking to update older locomotives of all sizes, builders and rebuilders said.

“We currently have rebuild/modernization orders with our customers in North America,” Marty Haycraft, executive vice president of rolling stock for Progress Rail, said in an email.

In June 2018, Canadian Pacific awarded a contract to rebuild 30 EMD locomotives to Progress Rail, which will remanufacture the units at plants in Indiana and Kentucky.

Once fully remanufactured, the locomotives primarily will be used in heavy haul applications. The upgraded EMD SD70ACU locomotives are known as modernized versions of SD90MAC models, Progress Rail officials said in a press release. CP expects to receive the remanufactured units this year.

Meanwhile, transit agencies and Amtrak also are upgrading or updating their fleets.

“We’ve seen a good bit of interest in both new and rebuilt locomotives, especially with regard to passenger locomotives,” said Adam Mohney, marketing specialist for Brookville Equipment Corp. “In some cases, agencies and railroads may allow builders the option to propose new or rebuilt units.”

Bottom line: Locomotive builders and rebuilders expect North American demand for new or upgraded power to be at least as strong in 2019 as it was in 2018.

“We anticipate rebuilds and modernization projects will remain on the horizon, [as will] considerations for new locomotives,” Haycraft said.

Officials at Railserve, whose LEAF® gen-set locomotives are designed for industrial in-plant and commercial yard switching applications, also expect new-unit interest to continue into 2019. If anything, Railserve officials expect demand to be better, they said via email.

LEAF units, which meet the U.S. Environmental Protection Agency’s Tier III and Tier IV emission standards for diesel engines, are designed to reduce NOx and particulate matter emissions by 84 percent, according to the company.

Other manufacturers are fine-tuning the way their units meet positive train control (PTC) requirements. Last year, Wabtec implemented a variety of services for railroads and transit agencies that include installation, training and long-term maintenance to complement its onboard locomotive PTC equipment, company officials said.

Meanwhile, Brookville Equipment has developed its first electric locomotives, Mohney said, adding that the units will be operated on a closed rail system at an iron ore mine in Labrador City, Canada. The locomotives, which will be powered by overhead wire, also will be autonomously controlled through an automatic train operation system, he said.

Locomotive builders also expect to continue to be busy outside of North America.

For example, Progress Rail entered into a long-term service agreement with Egyptian National Railways to provide new locomotives and modernize, overhaul and maintain a portion of the railroad’s existing fleet. 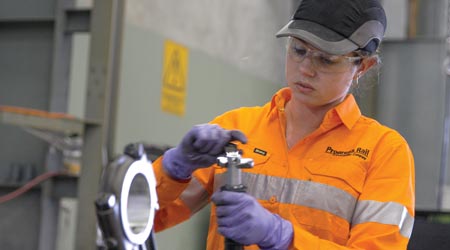 And as part of the company’s Modular Control Architecture Fleet Migration program, GE is upgrading 1990s locomotive control system technology with an ethernet-connected system on more than 4,000 locomotives worldwide. The aim: to improve train reliability, processing power, access to data and cybersecurity, according to GE. 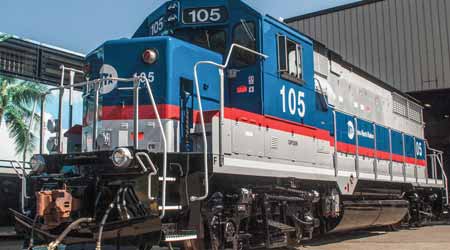 The company also introduced a new high-speed diesel engine program for the locomotive market. The high-speed engine will offer a “5 percent better total cost of ownership [and] be 5 percent more fuel efficient, saving customers more than 6,000 gallons of diesel per year,” GE officials said in a press release.

The engine also can reduce maintenance costs by 10 percent, they said.

“The combination of a powerful engine at a smaller size and weight makes the platform ideal in regions like Asia, Africa, South America, Australia and New Zealand, which require lighter locomotives,” GE’s Bader said, adding that Kazakhstan Temir Zholy will be the first railroad to use the new engine to power 300 shunter locomotives it ordered in 2018. Delivery is expected in 2019.

“With a strong and growing backlog of new locomotives and locomotive modernizations, we are hopeful about the health of our industry and anticipate consistent growth domestically and internationally,” Bader said.