L.A. Metro inks pact with CRRC for up to 282 new rail cars 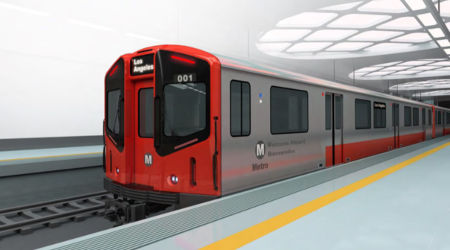 The contract includes a base order of 64 cars, with options to exercise up to five options to buy 218 additional units.

Thirty-four cars will operate on the Purple Line extension's first phase, which will run from Mid-Wilshire to Beverly Hills. That extension segment is slated to open in 2023.

CRRC promised to deliver the first pilot vehicle by spring 2020 and the entire 64-car base order by September 2021.

The combined cost of the base order and the options is estimated at $647 million, according to Metro. Funding will come from federal and local sources, including Measure R sales tax proceeds.

The cars' exterior shell will be manufactured at CRRC's plant in Changchun, China, with final assembly to be completed in Springfield, Mass.

The contract exceeds the federal government's "Buy America" provisions, which require 60 percent of component parts to be made in the United States.

CRRC also is building rail cars for the Massachusetts Bay Transportation Authority and the Chicago Transit Authority (CTA). The company last week broke ground on a new manufacturing plant in Chicago to build more than 840 rail cars for CTA.