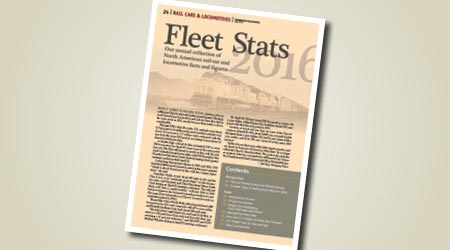 When it comes to rolling stock, a lot less of it was rolling on Class Is' networks in the second quarter. The large roads stored more locomotives and rail cars than they had at the same point in 2015, mostly because their traffic is down considerably.

A double-digit carload decline prompted CSX to store 300 locomotives by April 30 versus none at the same point last year. The fleet adjustment is nearly in line with the railroad’s reduction in gross ton miles, said CSX Executive Vice President of Operations Cindy Sanborn during a first-quarter earnings conference held April 13.

Comparing first-quarter figures in 2015 and 2016, CSX had about 400 fewer locomotives active in this year's quarter, "which is about 10 percent in line with the volume reductions," she said.

Canadian Pacific stored about 600 units in Q1 and the Class I now is in "extremely good shape” on the locomotive side, said President and Chief Operating Officer Keith Creel during an April 20 earnings conference. The railroad likely will "take a capital holiday" well into 2018 or 2019 before it returns to the locomotive-purchase market, he said.

"We [also] have right-sized our yard and local fleet. A total of a 150 units have been removed from this fleet, representing a 12 percent reduction," said NS EVP and COO Michael Wheeler during an April 21 earnings conference.

Suffice it to say that some of the following locomotive and car charts in Progressive Railroading's Fleet Stats ’16 coverage reflect the Class Is’ shrunken fleets. The section also includes an analysis of the box-car market by AllTranstek LLC Senior Vice President and Chief Commercial Officer Richard Kloster.